College students preparing to enter the workplace have to be concerned with much more than just résumés, cover letters and their wardrobes. 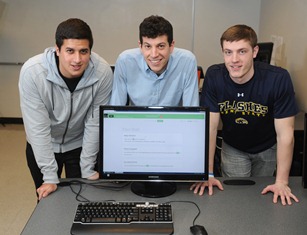 Most students today have some type of online presence, and prospective employers often scan these digital footprints to see if there are any signs of less-than-professional behavior.

Three Kent State University students recently developed a Web application to help those looking to clean up their acts – virtually speaking. Computer science majors Camden Fullmer, Daniel Gur and David Steinberg created FaceWash – now known as SimpleWash – in a weekend “hackathon,” a programming competition at the University of Pennsylvania that was held Jan. 18 – 20.

The Web app allows users to easily remove or edit objectionable content from their Facebook accounts, and the world is taking notice. In the 10 days following the launch, the site has attracted more than 135,000 unique visitors from more than 175 countries.

News about the students’ app began spreading before the trio returned home after a story was posted on the influential tech blog “The Next Web.”

“I’m personally blown away by how much reaction we’ve had,” said Fullmer, a Kent State senior who also majors in applied mathematics. “On the way home from the competition, I found the article online, and at that time, it already had 800 shares from people.”

The development has garnered attention from media outlets across the country, including the Los Angeles Times, PC Magazine, ABC News, Chicago Tribune and scores of others.

“There are a lot of college students joining the professional world, quickly and potentially not so easily, and so we thought we wanted to make a tool that can help automate the process of finding content connected to you, but that you clean up as you wish,” said Steinberg, a senior who also majors in electronic media production at Kent State. “We’ve received a lot of positive feedback from around the world, which has been really exciting.”

The trio is genuinely grateful for all of the positive coverage and feedback, but they are not resting on their laurels. They plan to continue to expand and improve SimpleWash.

“We began with a pre-set list of English terms that may be considered undesirable content, and we’ve since expanded to Spanish as well,” Steinberg said. “We will move forward with more languages from there, with the next one being French.”

Photo and image recognition functionality is now being explored, but the team is setting its sights beyond Facebook. Due to that expanded focus, on Feb. 1 they changed the name of their Web tool from FaceWash to SimpleWash, reflecting their planned move into additional social media outlets.

“There are a variety of social media that we’re really excited to expand into,” Steinberg said. “Twitter is our next step. People on Twitter actually have been commenting that they would be excited to have that functionality, and it is in the works now.”

Gur admits that juggling their busy schedules is a real challenge, especially in the wake of the extensive media coverage.

“It’s been a great learning experience,” Gur said. “But we basically don’t sleep that much anymore.”

Officials from Facebook have not contacted the budding tech developers.

“They have not commented on the use of the application,” Steinberg said. “The hope here is that you can maintain your public image in a professional light. We find Facebook to be a phenomenal social tool, and we only hope to expand it.”

Steinberg, Fullmer and Gur seem to be taking all of the attention in stride.

“The buzz really inspires us to work even harder on the project,” Fullmer said.

All three display a positive attitude that will no doubt serve them well as they pursue their dreams.

“We love this college, and we’ve had a great time here,” Steinberg said. “We’re really excited to be generating energy and excitement about the computer science department and Kent State as a whole.”