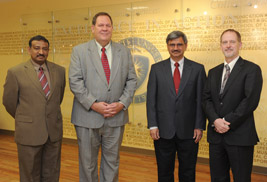 Kent State recently finalized the agreement under which the university will receive $1.25 million over the next three years. The BdREN project is financed by the World Bank. Engineers and experts from both sides will collaborate extensively in planning the advanced network with long-term capacity building in sight.

Javed Khan, Ph.D., chair of Kent State’s Department of Computer Science and an expert in advanced networking, will lead the project as the principal investigator.

“Research and education networks, originally inspired by US Internet2, are among the most functionally advanced networks in the world, but they also serve as a type of live research lab to test future technologies,” Khan says.

It is very difficult to lay conventional underground optical fiber networks in riverine Bangladesh, so the network will be implemented using electrical power line-borne fiber. The multigigabyte network will gradually expand to provide full optical interconnect capability among all universities and research facilities of Bangladesh. It also will be connected regionally and globally to other higher education networks around the world via Trans-Eurasia Information Network.

During the construction of the network, Kent State representatives will share knowledge with partner universities in Bangladesh to modernize campus networks and information services. The collaboration also will provide Kent State researchers and their partners an opportunity to expand scientific and educational collaborations.

“The success of this initiative shows that our researchers are second to none and are making an impact internationally,” says Kent State’s Vice President for Research Grant McGimpsey. “We are currently putting together several coalitions to compete in other new and nontraditional areas.”

The BdREN network, with its state-of-the-art, high-performance links, will provide network connections to geographically dispersed academics, scientists and researchers. “This will be an important milestone for the higher education system of Bangladesh since its independence in 1971,” Khan says. “It will also help in addressing the digital divide in higher education.”

OARnet, created in 1987 by the Ohio Board of Regents, is one of the most sophisticated superscale networks in the country, consisting of more than 1,850 miles of fiber-optic backbone. The network provides connectivity to Ohio’s colleges and universities, K-12 schools, public broadcasting stations and academic medical centers.

Ireland’s HEAnet has been in operation since 1983 and provides internet connectivity and services to the country’s schools and universities. HEAnet has significant experience in operating a power line-based overhead optical network similar to the one planned in Bangladesh. “Their expertise in this area made them a natural partner,” Khan says.

The Bangladesh project originated from a concept paper prepared by Khan in 2005 and supported by U.S. Fulbright Senior Specialist funding.

Khan and Kent State’s Associate Vice President for Research Satyendra Kumar conducted in-depth discussions and on-site negotiations in Dhaka, the capital of Bangladesh, with UGC representatives to finalize the agreement. "The negotiations were a real collective effort,” Kumar says. “Both sides worked very hard to successfully conclude the discussions conducted over three days.”

“It is our dream to get the universities of the world connected so scholars, researchers and students can communicate with colleagues in every country with the best possible communication media,” Khan says. “That’s the future we’re envisioning.”

More information on the project will be available at Kent State’s Media Communications and Networking Research Lab website, at www.medianet.kent.edu.