What Can I Do with an ADED SCIENCE Major?

What Can I Do with an ADED SCIENCE Major?

You can choose any of the following areas in which to specialize:

What are the Job Prospects?

Ingersoll and Perda (2010) report that 74% of all U.S. secondary schools reported hiring difficulties, and 56% of U.S. secondary schools reported annual science job openings.  Of these, 35% characterized their hiring difficulties as “serious” with respect to finding qualified science teachers (Ingersoll & Perda, 2010).  According to the U.S. Department of Education’s Preparing and Credentialing the Nation’s Teachers (U.S. Department of Education Office of Post Secondary Education, 2013), 46 states reported shortages in science teachers in the year 2009-2010.

Where Do KSU ADED Science Majors Get Jobs?

Within this program, you will spend hundreds of hours in various field experiences including a 12-week student teaching internship in a public school.  You will have many opportunities to try out the techniques you are learning in science teaching methods courses. 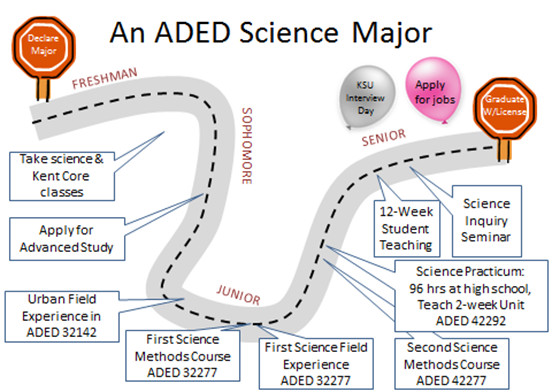 How Can I Learn More?