Live Chat
“I definitely had a purpose going into my college career, and Kent State Stark helped me achieve it,” says Kent State graduate Kent Weaver.

Growing up Mennonite at his family’s Sugarcreek-area farm, Kent Weaver considered Canton a big city. Now this self-described country boy is headed to the state capital.

A graduate of Kent State University at Stark, Mr. Weaver said the campus served as a conduit, channeling his sense of purpose that began when he was a child. Caring for the animals on his parents’ farm, he first harnessed his calling. 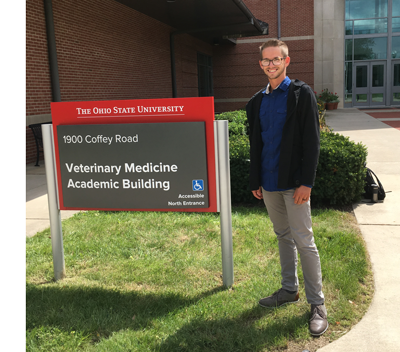 Now, he’s making that dream come true. This fall, Mr. Weaver is attending Ohio State University’s College of Veterinary Medicine, one of the top veterinary schools in the country.

Armed with his biology degree, completed entirely at Kent State Stark, Mr. Weaver says he is more than ready.

“I chose biology because I knew it would help prepare me for my desired career as a veterinarian,” Mr. Weaver explained. “I like how biology helps us understand how life functions and exists in the world.”

The possibilities are endless. “Even for a small-town kid,” he said, with a laugh.

Home-schooled, Mr. Weaver excelled at molecular biology and physiology. He embraced new discoveries as part of the team working with Associate Professor of Biological Sciences Matthew Lehnert, Ph.D., studying the way insects ingest fluids. The groundbreaking work could help people by serving as a model for targeted delivery of disease-fighting drugs.

At Kent State Stark, Mr. Weaver discovered the small class sizes helped him form relationships with his professors, who cheered him on. “The Stark Campus has the people and the resources – the high-quality labs and equipment.”

The gifted student also served as a tutor in the Academic Success Center. “That helped me further my communication skills,” he added.

“I definitely had a purpose going into my college career, and Kent State Stark helped me achieve it,” he continues. “The professors and staff, everyone helped in giving me more information about the world, and the many different options that are out there.”

Mr. Weaver plans to open up his own veterinary practice one day. With a specialty in large animals, the soon-to-be big city resident will eventually go back to the farm, make his home, and put down the roots that grew right along with his collegiate pursuit.