Hillary Clinton, Gender and Power Course to Be Offered at Kent State in Spring 2017

Following a recent visit to Kent State University's Student Recreation and Wellness Center, Hillary Clinton is coming back to campus as the subject of a new special topics course. The course is offered by the Women’s Studies program and the Center for the Study of Gender and Sexuality, both in the College of Arts and Sciences. The class, titled Hillary Clinton Case Study: Perspectives on Gender and Power, will be offered in spring 2017 and will explore the cultural perception of the former first lady, U.S. senator and secretary of state.

Clinton, who has been voted by Americans as the most admired woman in the world 20 times since 1993 in Gallup polls, was chosen as the subject of the class due to her long career in the public eye, which provides a wealth of material for analysis, and her historical candidacy for president of the United States. 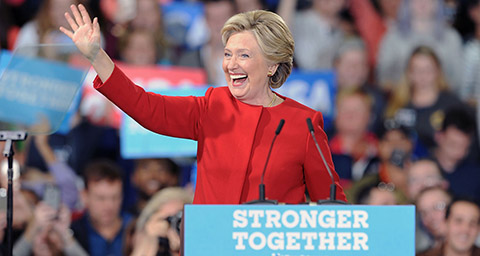 Molly Merryman, Ph.D., director of Kent State’s Center for the Study of Gender and Sexuality, sees classes like this one as promoting the center’s goal of exploring pressing, contemporary issues.

“The new Kent State Center for the Study of Gender and Sexuality is committed to bringing interdisciplinary scholarship into our classroom,” Merryman says. “This particular class exemplifies a synthesis of intellectual inquiry to help students deeply understand contemporary events.”

Merryman sees the center as being well-suited to teach a course on Clinton, particularly in the context of this year’s election season.

“During a presidential race that has included national conversations on trustworthiness, misogyny and sexual assault, a class like this will help to untangle these issues in public consciousness,” Merryman says. “I think that from time to time, there are these social situations that arise where we don’t fully understand what’s happening to women. Without the discourse that women’s studies provides us, we’re left with no answers because at face value, it doesn’t make sense until you look at it through that lens.”

The course will be led by Suzanne Holt, Ph.D., director of the Women’s Studies program and professor in the Center for Comparative and Integrative Programs at Kent State. While the course materials will likely span Clinton’s entire career, the recent election will provide a large amount of information as well. Holt cites press coverage of the election, exchanges between the candidates during the debates and social media venues as providing key reference points for the class.

“It will probably be the largest record of any women’s thoughts and positions on this range of issues,” Holt says.

In addition to Clinton’s own work, she has been a flashpoint for conversations from outside perspectives as well. Holt is excited to be able to explore these critical discussions of Clinton in a classroom setting.

“You have an incredible opportunity to look at this issue from other people’s vantage points in both an empathic and critical way,” Holt says.

Holt is glad to be working within the Center for the Study of Gender and Sexuality because she says “it provides a forum for marginalized voices to join larger conversations.”

“The center tackles issues that are more intimate than any other academic discipline – issues that are right at the core of our identity, of our most basic relationships and of how we do business as people,” Holt said.

Holt describes the course as being a “perfect mirror for us to see ourselves” in regards to women’s issues. By highlighting Clinton as both a cultural and political figure, she hopes that students will be able to better recognize the deep, historical roots of sexism and the struggle for women, even powerful women, to overcome ingrained ideas of what women are capable of.

“Our culture’s deep suspicions of women are suddenly becoming validated in the person of Hillary Clinton,” she says.