An image created by a Kent State University researcher graced the cover of the National Science Board’s Science and Engineering Indicators 2018 Digest, published in January. 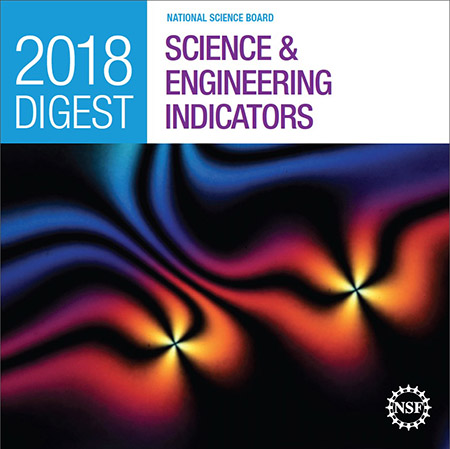 In the cover photo, the two dark centers from which the streamers emerge are called boojum, point defects in the molecular orientation of the liquid crystal, which form at the surface of a thin film of nematic fluid, the simplest form of a liquid crystal. The different colored bands indicate the varying orientation of liquid crystal molecules around the defect.

Liquid crystal research at Kent State has been supported by a series of National Science Foundation grants. The most recent, a three-year $500,000 grant from the NSF Division of Mathematical Sciences, was awarded last year to Dr. Lavrentovich, Professor of Mathematics Lothar Reichel and Liquid Crystal Institute Senior Research Associate Sergij Shiyanovskii for their project “Collaborative Research: Materials Engineering of Columnar and Living Liquid Crystals via Experimental Characterization, Mathematical Modeling and Simulation.”