Live Chat
Senior integrated language arts major Maxwell Rees (right) was inspired by his brother, who is on the autism spectrum, in the role of a 15-year-old boy with the same diagnosis in a Weathervane Playhouse production. (Photo credit: Aimee Lambes Photography)

Senior integrated language arts major Maxwell Rees says he didn’t hesitate to audition when he heard about the chance to be in one of his favorite plays, The Curious 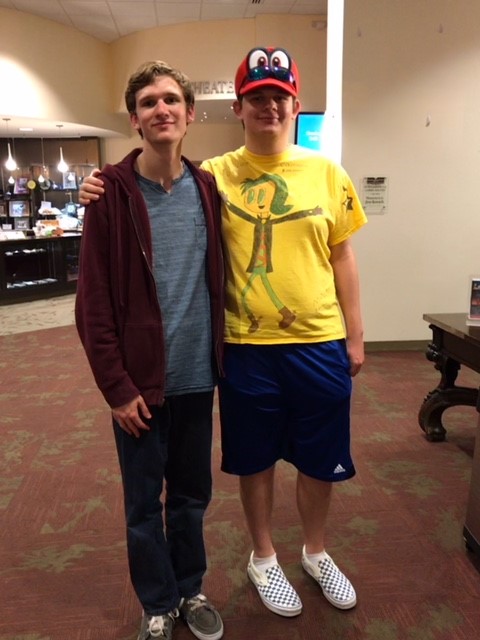 Incident of the Dog in the Nighttime, a story about Christopher, a 15-year-old boy on the autism spectrum, trying to find out how his neighborhood’s dog died.

For Mr. Rees, it was more than just being in the spotlight; it was about shining a spotlight on autism and its effects on individuals, their families and the community because Mr. Rees’ younger brother, Jake, is on the autism spectrum.

“He’s definitely the reason why I fell in love with this play and the reason I wanted to do it and tell Christopher’s story,” Mr. Rees says.

“When I first saw this play with my mom, I loved it,” he says. “I thought afterward that I would love to have the opportunity to play Christopher and then this opportunity came up.”

Mr. Rees says the play, which ran from Sept. 6-23 at Weathervane Playhouse in Akron, depicts some of the same experiences his brother has and the difficulties his brother faces.

“It is literally like they crawled inside my brother’s head,” Mr. Rees says. “The adaptation of what it’s like for my brother to navigate the world – how sound and lights and different things really bother him – was really accurate in the play.”

But Mr. Rees makes it clear that his brother’s diagnosis is not a weakness.

“Just because he has this diagnosis of autism doesn’t mean that label defines him,” Mr. Rees says. “He is definitely capable of doing many great things in life, and that is a very strong message in the play as well.”

Mr. Rees, who is also pursuing minors in mild to moderate special education and theater performance, says his career goal is to teach a high school inclusion classroom for students like his brother. Mr. Rees wants to set up a co-teaching environment with intervention specialists in order to work with students who are on individualized education plans.

“The reason I wanted to do that is because school wasn’t always the easiest for him,” Mr. Rees says. “I just want to make sure other students don’t have to go through those same struggles.”

Mr. Rees also aims to run a high school theater program, as he participated in many plays during his high school career. However, The Curious Incident of the Dog in the Nighttime is the first production of his college career.

“Even though my life has been crazy and stressful, I wouldn’t change it for the world,” Mr. Rees says. “I’m so glad I had this opportunity.”

As for Mr. Rees’ relationship with his brother, he says he wouldn’t change that for the world, either.