When it comes to finding new hobbies, Nathan Ritchey, Ph.D., vice president for Kent State System Integration, is an expert.

“I would much rather be busy than not,” he says. “I like the busyness – and by constantly moving, I always find new things to do.”

Vice President Ritchey, who is in charge of leading the Kent State Regional Campuses, has many hobbies, such as beekeeping, woodworking, welding, collecting and restoring antiques, and playing piano and guitar.

“The second I see something new I ask myself, ‘how does that work?’ and then I try it,” he says. “A lot of my colleagues only have what they do at work— that’s their identity. And that’s awesome. But I love to learn and continue to wonder how things work.”

Vice President Ritchey is also a collector of antique items, such as abacuses, slide rules, rubber change purses, staplers and insulators, which he finds at yard sales and flea markets.

“I like things that other people may find weird,” he says. “In general, most of the items I collect aren’t very valuable, but I like to collect them nonetheless.”

Although Vice President Ritchey is a mathematician, one of his first hobbies was unrelated to math.

“In college, I was double major – music and math,” he says. “I earned my doctorate in mathematics, but my music degree got put on hold. Now, I get to enjoy both!” 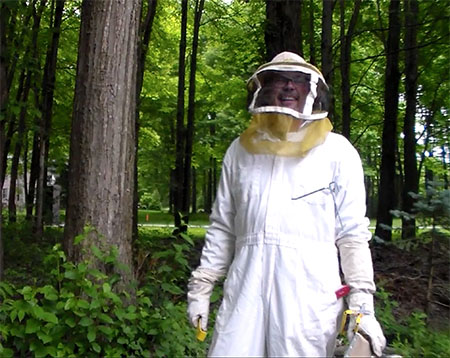 Of his many hobbies, Vice President Ritchey says his favorite is beekeeping.

“Beekeeping is marvelous,” he says. “It’s so great to be among my bees. They’re wonderful creatures. I love watching them because they work so hard — much harder than most humans. But they’re very fragile; they literally work themselves to death, which is why I try to do everything I can to make sure they survive.”

Beekeeping is different from any hobby he has had before because the stakes are much higher with living creatures, he says.

“It’s very challenging, and the risks are very high,” he says. “One mistake could mean life or death for the bees. But it’s incredibly rewarding. I just need to continue to find ways to hone my skills and learn more about beekeeping.”

“It’s really incredible to me,” he says. “As a mathematician, I like patterns, and there are so many patterns you can make while using a loom to weave. In fact, I am interested in using some mathematical structures to create more patterns.”

Vice President Ritchey says that prioritizing is the secret to finding time for all of his hobbies.

“I don’t get to do each hobby every day,” he says. “I sometimes won’t do a particular hobby for a few weeks or months at a time. But I always revisit hobbies — and it’s like discovering them all over again. We live in a marvelous world that is so full of surprises. For me, lifelong learning is a key to happiness and eternal youth.”

On how to start a hobby, Vice President Ritchey says that all that is needed is a spark of interest and a passion for trying new things.

“Ask yourself ‘what am I curious about?’ and go from there,” he says. “If you’re wondering how things work or how things are made, find out for yourself.”