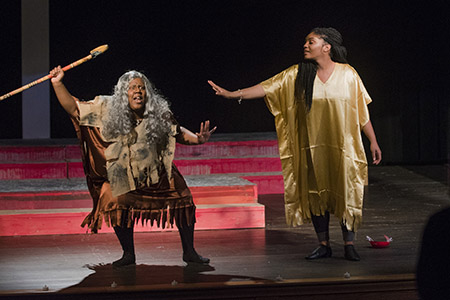 performed by the Pan-African Theatre Ensemble.

Opening night of the production will be Friday, March 17, at 8 p.m. The show will run March 17-19, with Friday and Saturday shows starting at 8 p.m. The play will close Sunday with a 2 p.m. matinee performance. Kent State students will be admitted for free with a valid Kent State FLASHcard. General admission is $10. Pre-sale tickets are available in Ritchie Hall main office, Room 127 from Monday through Friday, 9 a.m.-5 p.m. Doors open an hour before the show. Tickets can be purchased prior to show times at the African Community Theatre ticket booth. Presale tickets are available for purchase online at www.kent.edu/pas/african-community-theatre.

Venus recalls the true and historic account of Saartjie “Sarah” Baartman (1790-1815), who was kidnapped from her Khoikhoi people in South Africa in 1810 and paraded in freak shows in London and Paris. Baartman, dubbed “The Hottentot Venus,” was forced to publicly display her genitalia and buttocks, considered “abnormal” by European standards in the early 19th century. With a satiric and witty Brechtian style, Parks peels away the layers of ironies, tragedy, agency and access to Baartman’s body in freak shows and medical experiments. Through visual metaphors for fetish and voyeurism, this production of Venus explores Baartman’s objectification and the perils of historic and contemporary spectacles of black women in popular culture. Parks is an acclaimed African-American playwright and novelist. She has received numerous prestigious awards and is the first African-American woman recipient of the Pulitzer Prize for drama and the MacArthur Genius Award.

Established in the fall of 2016 by Forbes-Erickson, the Pan-African Theatre Ensemble is a nonprofit, repertory theatre developed for ongoing research in Pan-African theatre and performance in the Department of Pan-African Studies at Kent State. The primary mission of the Pan-African Theatre Ensemble is to promote black theatre in the United States and around the world. Its goal is to produce engaging, inspiring, experimental and eclectic theatre and performance styles from the Pan-African world, including the continent of Africa, the United States, the Caribbean, Latin America and Europe. The ensemble welcomes community participation regardless of gender, sexuality, race, ethnicity, disability and others in all areas of theatre.