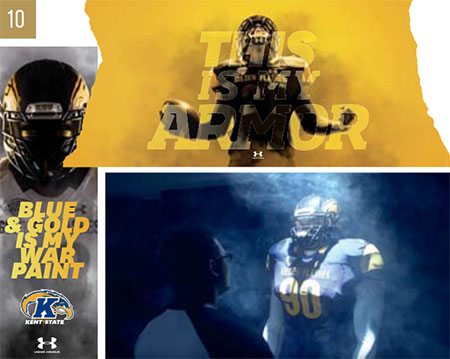 Jason Zehner, senior graphic designer in the Office of Communications and Marketing and the vice-chair of the ADDY committee, is in charge of coordinating and preparing the annual award show.

Mr. Zehner says that students should not be afraid to put themselves out there.

“Too often, great work is shot down by overly self-critical students before a professional ever has a chance to see it,” says Mr. Zehner. “The small submission fee is nothing compared to the possibility of having an award-winning piece in your portfolio and résumé.”

“It felt great to be acknowledged for the time for the hard work I put into my photography,” says Ms. Weissman. “This image is actually inspired by dealing with anxiety and depression and what it often feels like inside one's mind, hence the title Inner Demons. Kent State taught me all of the design elements and photographic skills to create a photograph that goes above and beyond.”

Ms. Harms was appreciative of her team of visual communication design students and Kent State for pushing her in her academics.

“Kent State’s visual communication design program has a strong print focus for graphic design, so I have had the opportunity to strengthen my typesetting and editorial skills through my courses,” says Ms. Harms. “This publication had a lot of voices and hands guiding it, so I am proud of the work we accomplished together.”

Jimmy Naples, a senior digital media production major, also won a Student Silver ADDY award for his work on a music video for Chil Rock Band. The song Something to Live For by Chil Rock Band is about how today’s society is caught up in technology, social media and the modern world.

“The award we won was a Silver Akron Addy for Best Cinematography,” says Mr. Naples. “I say we because my name is on it, but it wouldn’t be possible without my team. It was a very exciting experience, getting your name announced, seeing parts of your video on a massive screen and getting honored in front of a theater of people.

“It all comes down to hard work and pushing yourself beyond what you think you can do,” Mr. Naples adds.

Dr. Aguolu, a graduate assistant instructor for the College of Public Health, won a silver ADDY award for her comic on HPV. The credits for this project go to Kelsey Damicone, illustrator; Larrie King, senior director and designer; and Dr. Aguolu, concept and story.

“It is important that people recognize the importance of the topic of HPV, HPV vaccination and the potential of using graphic medicine,” says Dr. Aguolu.

Dr. Aguolu made reference to her academic advisor and thought that the university was helpful for her.

“The university has definitely been very supportive from the beginning,” says Dr. Aguolu. “My academic adviser Dr. Melissa Zullo and dissertation committee - Dr. Tara Smith, Dr. Lynette Phillips, Dr. Vinay Cheruvu and Dr. Laurie Wagner encouraged me to move with the idea when I presented it to them.”

She credited Mr. Soencksen from University Communications and Marketing with helping create the project.

“He is a marketing writer with the university who helped me turn the story into a suitable format for a comic book,” she says. “These individuals were all very patient as we all worked through this innovative project.”

The Akron ADDYs saw the best of the Kent State community, showcasing their talents and skills.

To view the award-winning projects in the 2018 Akron ADDYs Winner’s Book, visit http://aafakron.com/Akron_ADDYS_Winner_s_Books.