These numbers are stark and sobering; and worse yet, we still do not know exactly why cancer develops in its victims or how to stop it. 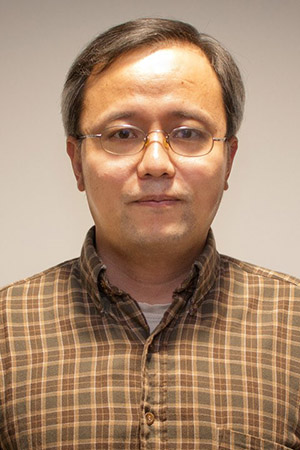 Hanbin Mao, professor of chemistry and biochemistry in Kent State’s College of Arts and Sciences, along with his graduate students, Prakash Shrestha and Sagun Jonchhe, and four Kyoto University colleagues, co-authored a paper titled “Confined Space Facilitates G-quadruplex Formation,” which was published March 27 on the esteemed journal’s website. The article discusses the genetic factors that influence formation of cancer cells.

“Traditionally, DNA has a two-strand shape — the double helix — and its purpose is to code the proteins that form life,” Mao says. “But recently, people have discovered that some DNA has four strands, and we call this the G-quadruplex. This is associated with the inhibition of cancer cells.”

However, while most G-quadruplex DNA is beneficial, Mao says some strands go bad and such mutations will enable cancer cell growth. To understand why this happens, scientists first had to learn why DNA sometimes develops into four-strand structures.

All DNA is generated by enzymes and operates like an assembly line. However, Mao says, there comes a point where DNA makes a decision to form a double helix or a quadruplex. He says most DNA takes the two-strand route simply because it is the easiest path.

Mao says nanometer-sized (one billionth of meter; 25,400,000 nanometers = 1 inch) spaces inside the enzymes are where these formations occur. The inability to mimic these spaces in laboratory settings has prohibited deeper study of the G-quadruplex formation. That is, until now.

That technology allowed Mao to create 6-by-6 nanometer-sized cages and then observe how DNA folded into different shapes inside the space.

“It’s easier for the DNA to fold inside the cage,” he says. “It folds to adapt to the small space, and here DNA naturally folds into the G-quadruplex.”

He says the process occurs two to three orders of magnitude faster inside the cage than out, folding 100,000 per second — a speed that makes forming G-quadruplex as fast and easy as forming a double helix.

“With that observation, we may follow the fate of the cell to be cancerous or healthy,” he says. “So we can perhaps learn how to introduce molecules or chemicals to interfere with that process.”

He says scientists can use ligands — bonded molecules — to facilitate this effect with greater potency, thereby reducing the likelihood that cancer cells will form.

“We can prevent or better treat cancer by stabilizing G-quadruplex structures,” Mao says.