Wet and blustery was the forecast on Oct. 20 when the Kent State Golden Flashes and the Akron Zips clashed on the gridiron at Dix Stadium. Needless to say, the weather did not disappoint. 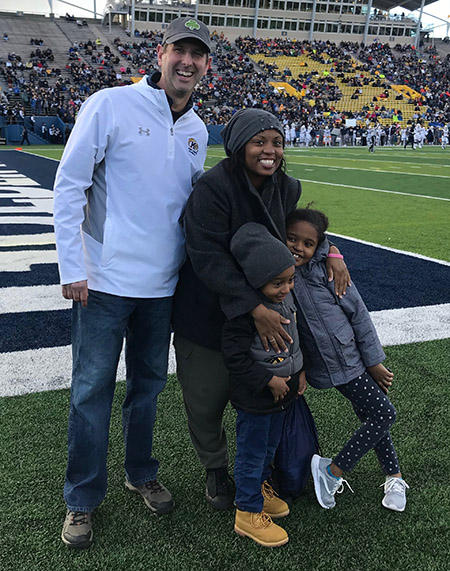 However, Zipporah Cole, a residence hall custodial worker, was not discouraged by the inclement conditions when she faced off against Ted McKown, associate director of admissions, to see who would win the Human Resources Family and Friends Appreciation Days’ Vacation Getaway.

The employees competed in a game of corn hole, but the stiff winds prevented either from sinking a bean bag, so they rolled the big dice to see who would land on the highest number. Mr. McKown threw a two; Ms. Cole tossed a four. Ms. Cole plans to redeem her winning certificate for a 2019 summertime trip. Her prize was provided courtesy of Klaben Auto Stores.

She is pictured with her daughter, Miah, 7, and five-year-old son, Maximus. For his efforts, Mr. McKown (pictured on the left) did not walk away empty-handed. He won a new Apple iPad, courtesy of T-Mobile.

The Kent State football team fell to the University of Akron in a thrilling overtime loss, 24-23. You can catch the Golden Flashes at Bowling Green on Tuesday, Oct. 30, at 8 p.m. on ESPNU.