Long before the show’s challenges began, the 2016 Kent State graduate overcame his own obstacles for a chance to win a million dollars and the coveted title of “Sole Survivor.”

“The show first aired when I was four, and I started watching it with my family,” says Mr. Derwin who grew up on Long Island. “And, I just kept watching. I’ve always loved the show.” 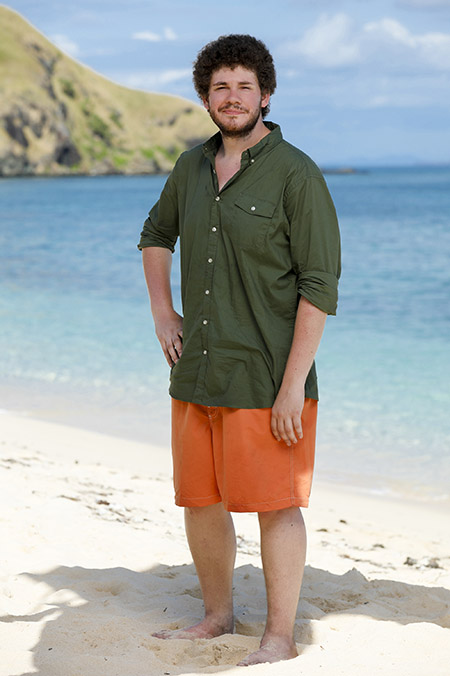 He started applying to the show as soon as he was legally able at age 18 and continued applying every year, for four years, until he was finally selected last year.

“Getting their attention, being an interesting person and learning how to get through that selection process took a lot of practice,” Mr. Derwin says. “After getting on the show, I went through a several-month-long period where I was trying to get ready to be there.”

During that time, he learned how to fast and survive on minimal food, which contributed to his 30-pound weight loss. Mr. Derwin also spent hours researching how to build basic shelters and fires, as well as completing different challenges — using YouTube and other social channels.

“I reached out to former players occasionally on Twitter for advice,” he says. “Mainly it was me doing my own research and training.”

However, Mr. Derwin says the biggest challenge of the game is not survival, but social strategy.

“It’s maneuvering through a lot of personalities, so people want to work with you and you can progress in the game to the point where you can win,” Mr. Derwin says.

These days, he notes, it is a lot more complicated than when he first started watching — you can be voted off if you are not in a majority alliance, if you are viewed as a liability or a threat, and if you are someone other players want out.

He credits his many years watching the show and his time as a journalism major at Kent State’s School for Journalism and Mass Communication as good preparation for honing his social skills.

“You have to get people on your side if you want them to work with you,” Mr. Derwin says. “For me, it took a long time to be good at that. “We all have to do it, but I’ve never been good at it. That is the whole thing though. Growing up, I wasn’t good at it.”

Mr. Derwin admits that being in journalism and being trained to conduct interviews, as well as other skills he learned at Kent State, helped him get better working with people.

“He’s a big guy with a huge heart,” says Susan Zake, associate professor in Kent State’s School of Journalism and Mass Communication and one of Mr. Derwin’s instructors. “In our ethics class, I could always rely on him to be absolutely empathetic and compassionate and not hold back on how some of the situations made him feel.”

And it may be that it is his ability to be empathetic and to read situations that help him this season.

“He’s such a good person with a strong moral compass and great critical thinking skills,” Ms. Zake adds. “He’s also very creative, which showed in some of the work he did at school.”

Before he came to Kent State, he attended high school in Merrick, New York, where some students were less than supportive of his dream. One student told him he would be the first one out of the game — but he did not let that stop him from pursuing his goal.

“You have to leave that stuff in the past,” Mr. Derwin says.

Even so, he still imagines what he would say to his high school detractors if he had the chance.

“Here’s how far I’ve come, what have you done? Did you go on an adventure of a lifetime that you’ve been waiting to do for 17 years? Here’s what I did, and I hope you’re as happy as I am,” he says.

As for the show, “I mean obviously I can’t say much,” Mr. Derwin laughs. “But it was a dream come true to get there and to actually get to see what it’s like when you get out to the island, being in the middle of this massive production with a bunch of incredible people. It really is something else. And knowing that I can get there, it’s insane.”

While he is tight-lipped about this season’s results, Mr. Derwin says he left the game with a community of players he now calls close friends.

“Having a lot of these friends that I’ve made from the show has been really cool,” he says. “I’ll always have this little community of players from my season and from other seasons.”

He says Ghost Island is a physical representation of an actual game, but also the idea of past mistakes. This is the 36th season of Survivor, so there have been many past mistakes throughout the show’s run, Mr. Derwin says.

“So the whole idea of this season is that we are tasked with fixing those mistakes – reversing the curse,” he says.

The intense theme adds an exciting twist to the show that has never been done before, he says.

For more information about Survivor: Ghost Island and the rest of the cast, visit www.cbs.com/shows/survivor/photos/1008120/survivor-season-36-meet-the-cast-of-ghost-island.