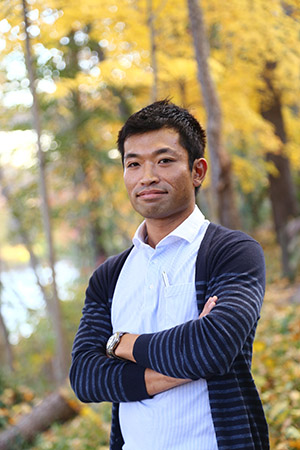 working to bridge cultural divides by developing a deeper understanding of Japan within the Kent community since August 2016.

The Japan Outreach Initiative was designed in collaboration with the Japan Foundation Center for Global Partnership and the Laurasian Institution. All coordinators spend two-year terms at their assigned institutions, which can be nonprofit organizations or academic institutions.

“JOI coordinators themselves take on a leading role to promote a grassroots exchange between the United States and Japan,” Osugi says. “JOI aims to provide a framework for promoting interest in or study of Japan by facilitating the dialogue about current Japan and U.S. issues.”

Although Osugi works with Kent State, his training as a Japan Outreach Initiative coordinator allows him to work with people from all ages and backgrounds. He has presented at teacher workshops, as well as cultural fairs at K-12 schools. Osugi says though he is here to teach, he also has been able to learn from his experiences.

“I really like the responses from kids because they are so direct with their interests and ask me a lot of questions that I don’t expect like, ‘Why did the Japanese create anime?’ or ‘Why do people fold (paper)?’” Osugi says. “I’ve never thought about it because people who live in a particular culture never think about things like that, right? It made me think deeper about it.”

Osugi recalls being asked to present to a group of more than 300 students at Jackson High School and the excitement of being able to showcase Japanese culture to a larger audience. Osugi also fondly remembers working with an elementary school student who showed him her notes when he revisited her class after initially teaching Japanese writing.

“I was very impressed," Osugi says. "She studied by herself and maybe tried many times because it’s hard to copy, so that fact made me very glad. Every outreach program makes me love this job more.”

Aside from his outreach duties, Osugi has hosted tutoring hours for undergraduates and debating hours for graduate students. He also assists with Japan coffee hour and works at the Office of Global Education once a week to strengthen ties with the university’s Japanese university partners for current and future exchange students.