Live Chat
Pictured are members of Kent State Robotics. The team will compete in May at NASA’s 2018 Robotic Mining Competition.

Kent State University student Madison Spreitzer spent her childhood building robots out of cardboard boxes and paint. Now, she builds them out of aluminum. And they work. They work well. Well enough to compete against other robots in NASA’s 2018 Robotic Mining Competition.

Ms. Spreitzer is the president of Kent State Robotics, a student group that hosts and competes in mining competitions focused on space mining. 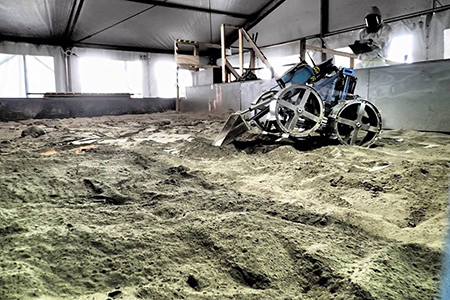 Since November, Kent State Robotics, along with 49 other university teams across the country, has been preparing for the annual NASA Robotic Mining Competition, held at the Kennedy Space Center in May.

“The goal is to dig simulated Martian terrain,” Ms. Spreitzer says. “The robots tear into gravel, which is used to represent icy regolith on mars. Then the robots dig into the gravel and dump it into the collection bins.”

The winning team of the mining competition is decided by whichever group mines the most of the gravel, thus gaining the most points for this portion of the NASA competition.

Teams all across the United States come together for this practice competition, and while the goal for each team is to come out as the winner, there is another underlying objective of this competition component.

“It’s really just about getting to know one another,” says Kent State senior Sarah Rosenbaum, a member and former president of the team. “It’s about learning and growing from the competition. It’s not about competing against one another necessarily. It’s nice to reach out to each other and ask for help.”

Within the competition is a community outreach aspect, where the teams use their skill set to give back to the community.

Throughout the competition’s presence at Kent State, Kent State Robotics has worked with children who are homeschooled, as well as with Tallmadge Middle School’s robotics team.

The team is now beginning the first steps of this year’s community initiative by contacting local Girl Scout troops.

“We have these robot car kits we’re going to have them work on, and they get to earn badges for that,” Ms. Spreitzer says. “A big part of it is reaching out to young girls because a lot of young girls don’t really get that opportunity the same way that young boys do, so we’re very focused on that.”

The team hopes that their hard works pays off in May, but for members like Ms. Spreitzer, being part of the team, the friendships that have been made and the experience of building a robot are rewarding in itself.

“For us, it’s not necessarily getting first prize; it’s learning something new from the competition each year,” Ms. Spreitzer says. “If we did win, it would be a huge honor, especially in the eyes of NASA. To be awarded by them would be really awesome.”

The team earned 26th place out of 50 in mining at the Sixth Annual NASA Robotic Mining Competition in Florida in 2015.