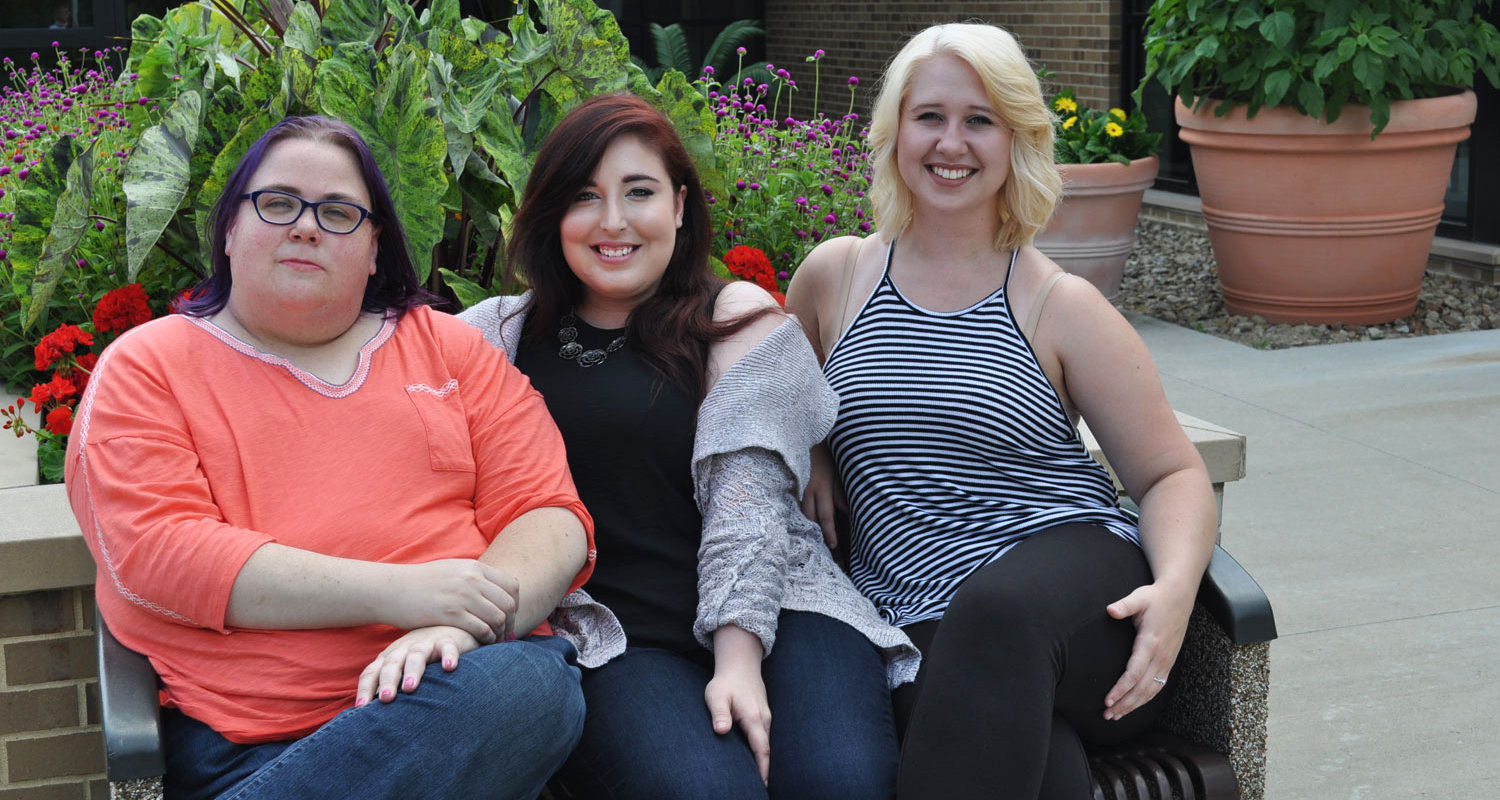 Aarika Denton, Hannah Satterfield and Julia Pitcock, English majors and members of the English Club at Kent State Salem, were responsible for two writing workshops held over six weeks this summer at the Salem Public Library. Independent of any writing class or assignment, the students planned every detail of the workshops and made the necessary connections with staff at the library.

The workshops were held each Thursday afternoon from 2-5:30 p.m. The first session was “Write Your Own Fairy Tale,” designed for kids, ages 8 to 11, followed by “Create Your Own Journal,” for kids, ages 10-13.

“We started out with 10 kids in the first workshop and four in the second workshop, but the number of students ranged between four to 12 kids for both workshops, depending on the week,” Denton explains. “We found that we ended up with mostly kids in the 10- to 12-year range for both sessions and this worked out great.”

During the first week of “Write Your Own Fairy Tale” workshop, a Wizard of Oz theme used a Yellow Brick Road to lead workshop participants through the steps of writing a story: setting, characters, problem, solution, etc.

In the “Create Your Own Journal” workshop, the Kent State students used a variety of writing prompts that encouraged the children to begin recording the various aspects of their lives and to consider how what they do and see can be used to write more active and interesting stories.

“Each week’s focus was a different aspect of writing and exploring creative writing techniques,” Denton says. “We were trying to get the kids to think about writing in different ways. By splitting the sessions up into different techniques, we hoped there might be something for everyone.”

She explains that each student received a folder that could be decorated and filled with various writing and brainstorming ideas generated over the series of workshops.

“Over the next five weeks, we gave the students flashcards to label characters as ‘good’ or ‘evil’ and let them put their imaginations to work creating stories based on ideas and themes that they randomly chose and then they switched with one another.

“There was a section on colors that involved using all five of the senses,” she adds. “We discussed emotional language through artwork and storytelling. We gave the students emojis and had them create stories with them. We ended the sessions with a scavenger hunt that sent the students throughout the library’s children’s section searching for clues to collect Snow White’s seven dwarfs.”

Denton, Satterfield and Pitcock spent hours planning and holding the workshops, knowing that they would receive no grade or extra credit in any Kent State class. Another Kent State Salem student, Brianna Parfaite, also attended the workshops once they began.

“We have been members of the English Club since it started at Kent State Salem,” Denton says. “We’ve talked about doing something in the community to represent ourselves as the English Club at Kent Salem, but, also to remind ourselves that we aren’t simply here to attend classes and receive our degrees. We all discussed many times how we wanted to remember our time at Kent State Salem as more than that. We really do want to be more than just students who pass through this campus without making much of an impact or doing more than showing up and getting a grade.”

The three Kent State students submitted the proposal, in person, to the Salem Public Library.

“After they read our proposal and passed it up to the director, Brad Stephens, we heard from Renae Ault, children’s services manager, soon after and everything moved along,” Denton says. “They were as excited to have us as we were to be doing it. I think their enthusiasm and trust in us as Kent State students really helped motivate us to make the workshops as great as we could.”

The library provided the room to hold the workshops, arts and crafts items, as well as use of the printer to make copies of worksheets for the students. The library also promoted the workshops through its printed literature, website and in-house television monitors.

“We do want there to be some recognition of the English Club on our campus,” Denton says. “It’s important to us, as English majors, that we try to break down the preconceived notions of liberal arts majors as people who are stuck in their choices of careers. We think graduates of our major can use the skills we learn in our classes to succeed in pretty much any field they try.”

Denton says that the original plan included a third workshop to provide a more free-form of writing for teenagers, which may take place this fall. Based on feedback from the participants in the first two workshops, the Kent State students are considering different themes, times and dates for the next phase.

“I can only speak for myself, but I learned a great deal about organization through this process and how you have to consider different levels of ability or interests or even how to plan something when you don’t know how many kids are going to show up,” Denton says. “I think we learned to let the students tell us what way the session should go. We want to make everyone as comfortable as possible so that they know it was a judgment-free, stress-free environment for them to be as creative as they wanted to be.

“I learned how important it is for kids to feel heard and understood,” she continues. “I think it reminded me, after a stressful semester, why we want to pursue this course of study. It was a good ‘real world’ application of the things we work on all year in our English classes and it provided perspective on why it’s so important for people to read – no matter what kind of reading they do. If one of the kids wanted to only read graphic novels or Minecraft manuals, we worked with that. The important thing was encouragement of their individual creative interests.” 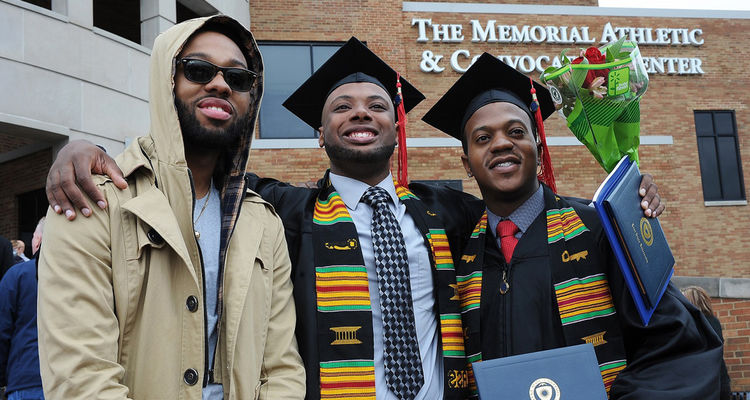 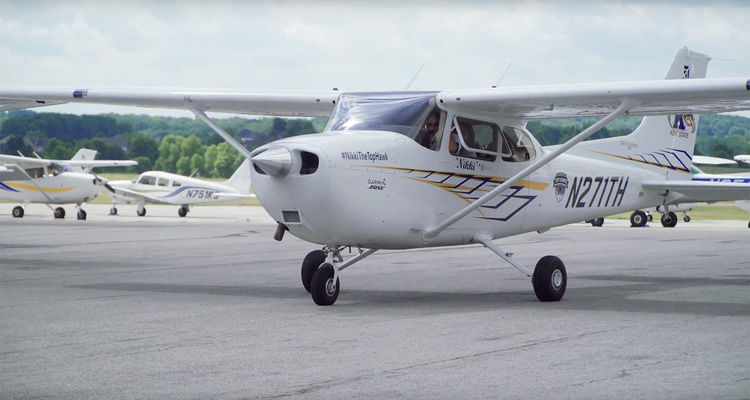 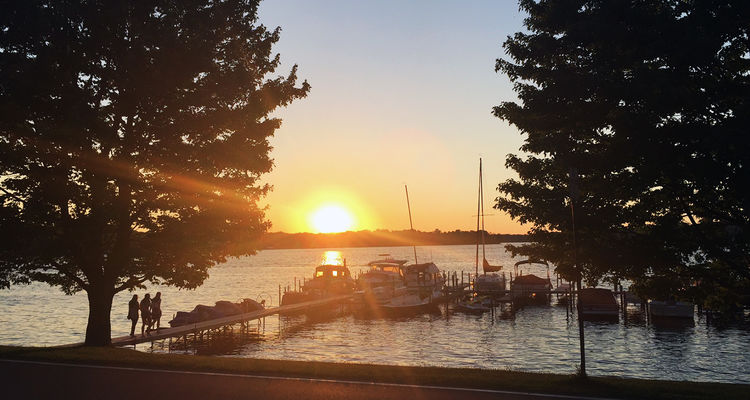