Kent State University at Stark will host its first Run the World race from 8:30-10 a.m. on April 15 to raise money for student education-abroad scholarships. 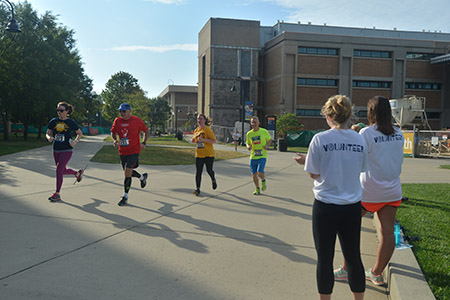 Organized by Kent State Stark, the colleges within Kent State and the Office of Global Education, the race will start at 6000 Frank Ave. NW in North Canton. It will follow a 3.1-mile course with chip timing provided by Western Reserve Racing.

Held for the past two years at the Kent Campus, the Run the World race has awarded $18,000 in scholarship money for students studying abroad. Students who register for the race, even if they don’t run, will have a chance to win one of the multiple $1,000 scholarships toward education-abroad experiences.

Race Director Edward Butch, academic recruitment and retention director for the College of Arts and Sciences, says he is excited to expand the race by bringing it to a Regional Campus. He says the race aligns with the university’s mission of global competitiveness by funding students studying abroad.

“In following the president’s vision of One Kent State, this Kent State Stark Run the World race will underline how vital Regional Campuses are to the international mission of the university,” Butch says. “I’m excited to see where we can go with Run the World in the future.”

Kristin Stasiowski, race founder and assistant dean of international programs and education abroad in the College of Arts and Sciences, says Run the World is the first and only universitywide fundraising event that supports all students from all colleges, campuses and programs to go abroad. The Kent State Stark race will be a pilot in hopes of starting a universitywide race series at the Kent Campus and Kent State Stark.

For academic year 2017-2018, the Run the World race plans to expand its offerings as a race series that will include both the Kent and Stark campuses.

“At the start of the next academic year, students can register for either the Kent Campus or Kent State Stark race as a one-off or register for both at the same time,” Stasiowski says. “Doing so, they would be a race series participant, so they would get all the rights and privileges of both races and receive a third medal showing they ran both races in one academic year.”

Stasiowski says they also are working to incorporate a Run the World race during the Florence summer institute education-abroad program.

Early bird registration for the Kent State Stark race ends March 17. The cost to participate is $25 plus a $2.50 sign-up fee. After that date, the price will be $30 plus the fee. Registration is open to all and includes a Run the World T-shirt, finisher’s medal, events, food and water after crossing the finish line.

Register for the race