Against all odds, Ya’el Courtney has become a standout in the science, technology, engineering and mathematics (STEM) fields and found a world of success after her acceptance into a top-tier summer science program.

Ms. Courtney, a senior biology major at Kent State University, was accepted into the summer program in genomics research at the Broad Institute of MIT and Harvard. Ms. Courtney was selected out of 900 applicants for the nine-week program that kicked off in June in Cambridge, Massachusetts. 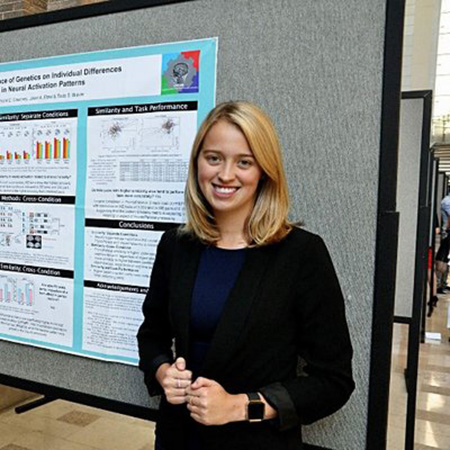 Ms. Courtney has been working her whole life to receive an opportunity similar to this. Growing up, she felt a lot of pressure from her parents because they were both scientists and it led to an unhealthy relationship. She left her home and parents when she was in high school in order to find a more suitable life for herself.

“I had this huge existential crisis, and I was like, ‘I can do anything now, I don’t have to be a scientist and my parents aren’t telling me what to do,’” Ms. Courtney says.

Ms. Courtney took some time to herself in order to find out her passion without the influence of her parents or a toxic atmosphere, but she always came back to science.

“The only thing that was constantly fulfilling and interesting to me was science,” Ms. Courtney says.

Science ended up being Ms. Courtney’s passion. She just needed to find her way back to it on her own terms.

After high school graduation, Ms. Courtney took a gap year in order to save up for college. She read 300 books during her gap year and worked tirelessly until she accepted her full scholarship to Kent State.

Ms. Courtney recognizes the uphill battle it took to get to where she is now.

“For a long time, I worked hard, and for a lot of my life, there wasn’t a lot of reward, and now I am at a point where hard work has positive results,” she says.

She went from sleeping only three hours a night during her freshman year to taking some time to realize mental health must come first in order to succeed.

“Freshman year, I thought if I wasn’t stressed, I wasn’t being productive,” Ms. Courtney says. “I believe if my mental health is flourishing my grades will come easy.”

Ms. Courtney recognizes a lack of diversity in the STEM fields and hopes for inclusion of everyone in the future.

“I think there is more resiliency in women and minorities because of the judgment we face on a daily basis,” Ms. Courtney says. “In science, resiliency is the most important thing.”

Over the years, Ms. Courtney has struggled to overcome stereotypes.

“Something super important to me is not judging anyone,” she says. “I’ve been looked down upon in academic circles because I am blonde and because I’m attractive and because I’m a female, and I hate that. I think one of the biggest things I’ve learned is to take people where they’re at right now and not judge on appearances or background.”

Science permeates every facet of Ms. Courtney’s life, and now, she has nothing but choices in front of her. She plans to move on to graduate school after she graduates from Kent State.

“She joined my lab, and we began to discuss her plans to pursue research related to her interest in neuroscience, it was immediately apparent that she was bright, motivated and eager to get involved,” Dr. Hughes says.

In addition to professors, Ms. Courtney credits Kent State for helping with her success.

“There is a very positive atmosphere toward research, and it’s very collaborative and encouraging compared to some institutions that are much more competitive and demeaning if you’re not good enough,” Ms. Courtney says.