Every holiday season, people give back to their communities in numerous ways. At the Kent State University Airport, they give back through the Props-4-Paws initiative, a donation drive for the Humane Society of Summit County and the Animal Protective League of Portage County (APL).

Dave Poluga, airport manager, knew he wanted to give back to the communities surrounding the airport but did not know how he would do that.

“We had a bunch of different ideas floating around about how to give back to our communities, but helping the humane societies resonated with me,” Mr. Poluga says. “I got the idea to name it Props-4-Paws about two years before we actually began the donation drive.”

Two years after sparking the idea for Props-4-Paws, Mr. Poluga and Jim Sebastian, ’94, professor and flight instructor, put the plan in motion. 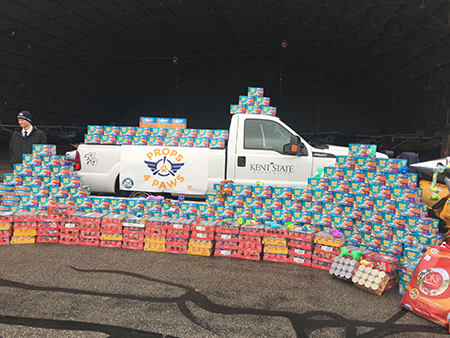 “After watching a heart-wrenching video about an animal, I knew that the animals in our counties needed our support sooner rather than later,” Mr. Sebastian says. “I saw Dave that day, and we got started on Props-4-Paws right away. That was six years ago, and we don’t plan on stopping any time soon.”

Every year, the Props-4-Paws team has increased its donation goal. This year, they received almost 8,000 pounds of food, which translates into more than 10,000 meals for the dogs and cats at the local animal shelters. These results are up 20 percent from last year, Mr. Sebastian says.

“After collecting as much as we did this year, I’m not sure how we could surpass that next year,” Mr. Poluga says. “However, I believe we are at a very sustainable amount, and I hope to stay around these numbers for years to come as we continue to spread the word of our drive and help out these animals in need.”

The donation drive typically runs for two months, kicking off at the annual Aeronautics Fair in September. They collect anything that would benefit the shelters such as food, toys, leashes and more.

“If an item is pet related, I can almost guarantee you that we’ve received it within the last five years,” Mr. Sebastian says. “We rely on our Kent State community to give donations but also on the communities of Summit and Portage counties.”

This donation drive has greatly benefited the shelters, and they now factor the donations into their budgets.

“They rely on us every year to help them run their shelters, and our donations free up their funds for other costs such as veterinary needs.” Mr. Sebastian says. “Without everyone’s help, Props-4-Paws would not be as successful as it is.”

Those involved with Prop-4-Paws and the Kent State University Airport love being a part of this donation drive and hope to maintain it.

“Giving back to our community is something everyone here at the Kent State Airport takes pride in doing, and I hope to see Props-4-Paws continue to support our local shelters for a long while,” Mr. Poluga says.