The Kent State University Airport received the Animal Heroes Award, along with certificates from the Ohio Senate and House of Representatives, at the 2017 Summit County Humane PAWSibility Ball for its Props 4 Paws pet food drive.

“Kent State received the award, but it was earned by a much broader community,” says Airport Manager David Poluga. “All we did was collect and distribute; it was members of the community who donated.” 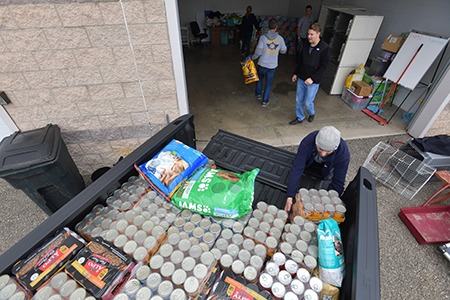 “The community has really rallied behind us,” Sebastian says. “The first year, we delivered all of the donations in the trunk of a car. This year, it took three truck loads.”

Aside from a couple of small fundraisers, most of the donations came strictly from the community, adding up to almost 37 weeks’ worth of food last year.

The night turned out to be bigger than what they expected, Sebastian says. In addition to the Animal Heroes Award, the Props for Paws team received recognition from the Ohio Senate and House of Representatives.

“We didn’t see that one coming,” Sebastian says. “It was almost breathtaking at that point. That’s when it really sunk in.”

Sebastian says an anonymous donor from the community has been consistently sending them cases of cat food for the past six months.

“We have no idea who’s been sending them, whether it is one person or more, no one will own up to it,” Sebastian says. “It’s those little things that really help the shelters.”

Sebastian adds that the food drive has a far-reaching influence, and that one day Props 4 Paws wants to be able to provide all the meals for the animals in these shelters.

“We hit a sustainability point this year, reaching 70 percent of a year in donations,” Sebastian says. “It’s our goal to get to 100 percent.”

Poluga says Props 4 Paws has become a part of the airport and that he does not think they will ever stop their donation drive.

This year’s Props 4 Paws food drive is underway and will continue until Nov. 12. Donations can either be mailed to or dropped off at the Kent State University Airport.

For more information about the Kent State University Airport or updates on Props 4 Paws, visit www.facebook.com/Kent-State-University-Airport-124148141874.