As their families watched, Trevor White and Terrance Duncan were sworn in as Kent State University Police Services’ newest officers on Tuesday, Feb. 14, in a ceremony presided over by Chief of Police Dean Tondiglia in the Stockdale Safety Building. 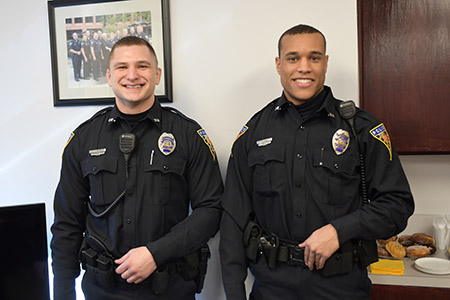 White graduated from Kent State with a criminology degree. He gained prior experience in the department as an auxiliary service officer (ASO), a student worker in the police department who helps check campus buildings and fulfills administrative duties.

“The chief and assistant chief talked me into applying here,” White says. “I think my generation will be the one to take away some of the negative connotations police officers have.”

Duncan is a mechanic in the National Guard who says he looks to his father, a former police officer, as inspiration to do work in this field.

“I looked around at a lot of police departments,” Duncan says. “Kent State was willing to send me through the academy, and not many places do that. I’m excited to get out there and start helping people. Ever since I was a kid, I’ve wanted to be a police officer.”

The process to become a police officer at Kent State on average requires more testing and evaluation than other proximate departments, says Bill Buckbee, assistant chief of police. Kent State Police Services puts the trainees through physical and written assessments, as well as real-life scenarios, before they even enter the police academy.

“We have extra steps in our process that most police departments don’t have,” Buckbee says. “The scenarios tell us if somebody can come in and talk to people, think on their feet and have a personal style that’s going to help as a police officer anywhere but especially here at Kent State.”

Since being sworn in, the two new officers have been working with a field-training officer who mentors and coaches them to achieve further preparation for the job.