“This season is highlighted by multiple award-winning entertainers,” says Brad Bielski, Ph.D., dean and chief administrative officer of Kent State Tuscarawas. “We have three Grammy-winning musicians and three Tony-winning Broadway shows scheduled to appear on the Performing Arts Center stage, as well as Emmy Award-winning comedienne Vicki Lawrence who is one of the most beloved television personalities of her generation.”

In her show Vicki Lawrence and Mama: A Two-Woman Show, Lawrence plays the first half of her show as herself and the second half as Thelma “Mama” Harper from Mama’s Family and The Carol Burnett Show, Vicki will put on a performance full of hilarious stand-up comedy, music and anecdotes about real life. 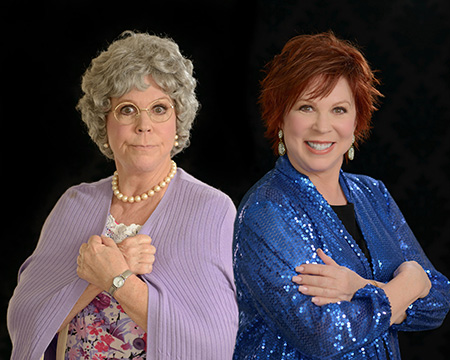 Headlining the diverse Music Series are Grammy winners Rick Springfield, Lee Ann Womack and Mary Chapin Carpenter. Students in the area will get a chance to perform with a cappella sensation Cadence and New Basics Brass Band.

“Last season we brought in an a cappella group, which toured local elementary schools and then worked with two high school choirs,” says David Mitchell, general manager for the Performing Arts Center. “It was such an amazing experience for all those involved. I wanted to expand the offering to include band students as well as the choirs. New Basics Brass Band describes their sound as sousaphone-driven feel-good music, so I’m sure they will be a big hit with students.”

The music series is rounded out by arena rock-pop icons 38 Special and critically acclaimed vocalist Helen Welch paying tribute to the music of The Carpenters.

“Broadway shows are always a favorite with our patrons,” Mitchell says. “This season, I’m delighted to bring some of the most enduring stories and music that has ever graced the Broadway stage.”

The entire family will be captivated as they travel down the Yellow Brick Road and beyond with Dorothy, Toto and their friends the Cowardly Lion, Tin Man and Scarecrow. The Wizard of Oz is a lavish production, featuring breathtaking special effects, dazzling choreography and classic songs.

“Don’t miss the chance to travel Over the Rainbow and experience this national treasure on stage,” Mitchell says.

The spirited, romantic and beloved musical The Sound of Music is the story of Maria and the von Trapp Family. It will once again thrill audiences with its Tony, Grammy and Academy Award-winning Best Score, including “My Favorite Things,” “Do-Re-Mi,” “Climb Ev’ry Mountain,” “Edelweiss” and the title song.

With Rodgers + Hammerstein’s CINDERELLA, audiences will enjoy this contemporary take on the classic tale, which features an incredible orchestra, jaw-dropping transformations and all the moments you love — the pumpkin, the glass slipper, the masked ball and more — plus some surprising new twists! Rediscover this hilarious and romantic Broadway experience for anyone who has ever had a wish, a dream ... or a really great pair of shoes.

Based on Roundabout Theatre Company’s Tony Award-winning production, Cabaret closes out the Broadway season. Come hear some of the most memorable songs in theatre history, including “Cabaret,” “Willkommen” and “Maybe This Time.” This production contains mature content.

“Many times after an artist has played in our beautiful facility, they can’t wait to come back,” Mitchell says. “This is absolutely the case with Alton Brown. He’ll be coming back to New Philadelphia with his new show Alton Brown Live: Eat Your Science. Fans can expect more comedy, talk show antics, multimedia presentations and music (yes, he sings), but Brown is adding a slew of fresh ingredients, including new puppets, songs and bigger and potentially more dangerous experiments. Brown has a knack for mixing together a perfect base of science, music and food into two hours of pure entertainment.”

Memorable holiday performances include Christmas With the Annie Moses Band and Sister’s Christmas Catechism: The Mystery of the Magi’s Gold.

“We had the show Late Nite Catechism a few seasons ago and the audience loved it,” Mitchell explains. “They couldn’t stop laughing! I’m excited to bring 'Sister' back in this follow-up show, which is bound to bring a smile to anyone’s face during the holidays.”

“I’m thrilled to introduce a new series to the Performing Arts Center season this year,” Mitchell says. “Our Come Hear Series will introduce our audiences to new artists they otherwise might not get a chance to experience. I really think people are going to enjoy these artists and I encourage them to ‘Come Hear’ some brilliant music in our exceptional Performing Arts Center environment.”

Artists scheduled for the Come Hear Series include David Myles, a co-headlining show with Royal Wood and Diana Chittester and Rosie & the Riveters.

The popular Cabaret Series returns and features performances by Tri-C, Alex Bevan, Mo' Mojo and The Portersharks. The cabaret tickets are $45 and include dinner.

“For the third year, Michael Taylor Insurance & Financial Inc. will sponsor the upcoming season,” Bielski says. “We are also grateful for the third consecutive year sponsorships of AquaBlue Inc. for the Cabaret Series and the Tuscarawas County Community Foundation’s sponsorship of our Broadway Series. Both Alonovus and House of Stones are joining us as well, as series sponsors for the second year. These partnerships enable us to keep our Performing Arts Center ticket prices affordable and accessible to those who want to attend our shows.”

How to Get Tickets

A complete list of performances and ticket prices are online at www.kent.edu/tusc/pac.

Free and convenient parking is available for all shows. The Performing Arts Center at Kent State Tuscarawas is located at 330 University Drive NE, in New Philadelphia.