Live Chat
The design team of Ann Marie Elaban (left) and Kassidy Brillhart (right) are announced as winners of this year’s Rock the Runway fashion show.

Kent Student Center Programming, part of the Center for Student Involvement, hosted the 13th annual Rock the Runway on March 4. 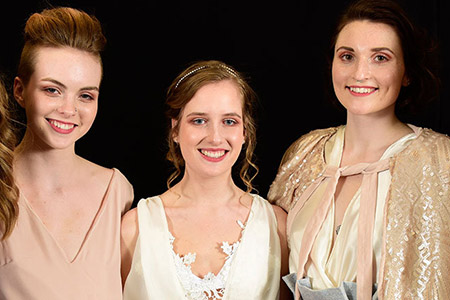 The runway featured 21 collections by 24 designers, many from Kent State University’s School of Fashion Design and Merchandising. The Kent Student Center Ballroom was decked out in 1920s’ style with an elevated runway to showcase the designs. The Kent State University Jazz Society Quartet, made up of Kent State students, performed themed music during the show, which was hosted by sophomore communication studies major Michael Gallagher II.

The first-place collection was chosen by a panel of three judges, and the designers won half of their fall tuition. The “audience-choice” winner received $500 to Mood Fabrics, a fabric store known for its product placement on the Lifetime network’s Project Runway.

The theme this year was the Roaring ’20s drawing many designers to the idea of flappers and Hollywood influence, but the winning duo, sophomores Kassidy Brillhart and Ann Marie Elaban, went a different route.

“We put together a mood board for inspiration and tried to think about what was going to make us stand out from other designers,” Elaban says. “We did pull from typical ’20s images, but we wanted to make our collection different.”

The pair looked to a popular dance from that time to inspire their collection, “Living Lindy.”

“Texas Tommy was a popular dance in the south during the 1910s,” Elaban says. “It turned into the Lindy Hop in the 1920s and was more popular toward the end of the ’20s. We wanted the name and collection to reflect the lifestyle of women of that time.”

Their three designs combined elements of masculine and feminine styles. “We really wanted to do something extravagant,” Brillhart says. “The 1920s is interesting because the style was more elegant, and the idea of doing something based on menswear really interested both of us. We went with a masculine silhouette with more of a feminine color palette.”

Brillhart and Elaban met in fashion design classes, and when they heard about the show, they decided to work together.

“The ’20s was a time that both I and Kassidy liked and could find inspiration in, so we decided to go for it and put our application together and submitted it,” Elaban says.

All designers submit an application with three tentative sketches of their designs and a statement that described their vision and inspiration for the designs.

“It was a long process,” Brillhart says. “We made three different versions of one top before we decided on the final one. We went back and forth on ideas to make sure everything was cohesive and that the style lines were similar, but different enough. We didn’t have much experience working with the fabrics we used. Sewing sequins to velvet and hand stitching the lace was a lot of work.”

This was the first runway show either of them had participated in, and Elaban says it gave them an opportunity to show their creativity outside of the classroom.

“I didn’t really think we would win,” Elaban says. “But I always had faith in us. We work really well together and are good at editing each other’s styles to make a cohesive collection. I’m really proud of us for finishing and making everything as beautiful as I thought it would be. I still can’t believe we won.”