“Imagine being able to share appropriate contact information in an instant with one scan on your mobile device,” says Zachary Eckert, Kent State senior finance major. “Circl allows you to do so. It is an app that brings a new definition to a meaningful connection, and it gives you the ability to share contact information on your own terms.” 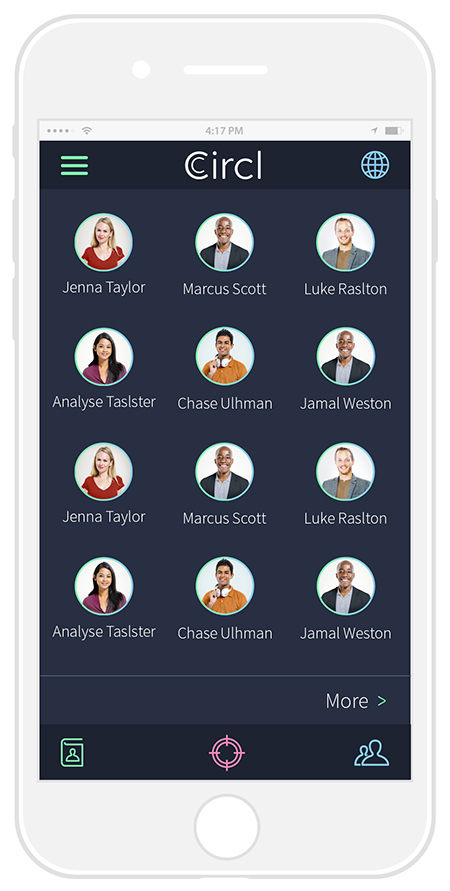 In its earliest stages, Circl already has been recognized with various awards, including the Burton D. Morgan Foundation’s Most Entrepreneurial App award and a third-place award in Kent State’s Idea Olympics. Eckert and Frindt credit their success to LaunchNET Kent State’s unwavering support.

“LaunchNET Kent State has been very supportive of us,” Frindt says. “They are our advisors and helped us navigate from idea to concept to product. They are the best.”

Circl uses customizable quick response (QR) codes that allow users to pre-program their contact information in different situational folders within the app. In other words, users can create a professional networking folder or a social folder for more casual meetings. They can scan these QR codes, as well as import and export contact information from a folder into their mobile devices.

When a Circl-Swap occurs, information about the exchange, including the exact location where the meeting occurred and any notes recorded, is saved within a situational folder. Users do not have to worry about forgetting where they met someone or other important information when networking.

Eckert says the app is in some ways similar to Apple’s AirDrop and Bump, an app acquired by Google. However, Circl does not make sharing contact information visible to the public for security purposes.

“Our app facilitates face-to-face communication that you would get from exchanging a business card without the actual business card,” Eckert says.

Circl is currently in its beta test stage and was released on April 19 for iOS users. Since its release, Eckert and Frindt have focused their post-launch strategy on Kent State students who are heavily involved on campus, such as fraternities, sororities and other student organizations.

Their goal is to leverage a strong college student user base that will eventually use Circl in postgraduate life. Eckert hopes to expand the launch strategy to other universities, as well as to Android users, in the future.

Circl is not Eckert and Frindt’s first contribution to helping Kent State students further their professional development. In January 2015, they founded Kent State’s first Business Leadership Club with the mission “to prepare for leadership roles in the business environment through improved communication and encourage a leadership-focused culture at Kent State.” Under their leadership, the organization retained more than 40 new members and raised significant funds for the Alzheimer’s Association.

"We love to build opportunities,” Frindt says. “After we passed along the Business Leadership Club, we didn't want to stop. We are very Kent-focused because it is our home and we want to give back to the community."