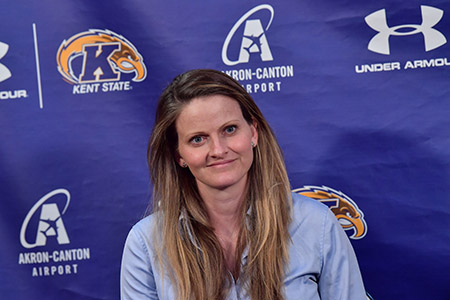 experience across all levels of collegiate lacrosse and has been around the sport her entire life. She is the daughter of seven-time NCAA National Champion and current Denver men's lacrosse coach, Bill Tierney. She has served in several roles during her decade-long coaching career and has helped guide student-athletes to success on and off the field.

"We are excited to bring in Brianne to start our women's lacrosse program," says Director of Athletics Joel Nielsen. "The Tierney family is recognized across the nation in collegiate lacrosse, and Brianne herself has a proven record of success. Tierney has experience building a program from the ground up, and we are eager to see her develop our newest athletic program."

As part of its strategic vision, The Game Plan, Kent State announced the addition of women's lacrosse in the summer of 2016. The program will begin competition during the 2018-2019 academic year, bringing Kent State's sport total to 19, including 11 women's programs. It marks the first addition of a varsity sport at Kent State since women's golf began competition in the 1998-1999 academic year.

"I am truly honored to be joining the Kent State University athletic department as the first women's lacrosse coach," says Tierney. "I want to thank President Warren, Joel Nielsen and Janet Kittell for entrusting me to build on the foundation they have worked diligently on over the last two years to establish."

At Kent State, Tierney will be building a new program for the second time in her career. She previously served as the first head coach at NCAA Division III's Lebanon Valley College, where she began the institution's lacrosse program. Tierney's program began competition in the spring of 2010, and by the 2012 season, she earned Commonwealth Conference Coach of the Year honors and mentored the 2012 Commonwealth Conference Player of the Year.

"As a fan of the sport living in Ohio, [I found] the June announcement of the addition of a new Division I program in our area extremely exciting; now, to be at the helm of the Golden Flashes Lacrosse program is a dream come true," Tierney says. "The atmosphere on campus, commitment to excellence on and off the field, and success of so many teams in the department make Kent State an incredible place to be a head coach. It is a privilege to have the opportunity to recruit student-athletes to Northeast Ohio to play the sport at its highest level."

Her most recent Division I experience came while serving as the assistant coach and director of camps and clinics at Lafayette College. She served as the program's offensive coordinator and ran several lacrosse clinics and camps in Easton, Pennsylvania.

Prior to her time with Lafayette, Tierney was the director of men's lacrosse operations for the University of Denver from 2012-2014. In Denver, she served on a top-5 NCAA Division I staff and helped guide the program to back-to-back NCAA semifinal runs. She also brings Division I coaching experience from her time at UC-Berkley and Monmouth.

Tierney earned her Bachelor of Arts in English from Colgate University in 2007 and helped the institution win two Patriot League Championships as a student-athlete. She started her collegiate career at Loyola University Maryland, where she helped the program reach the NCAA semifinal round.

Tierney is the wife of Dylan Sheridan, head coach for men's lacrosse at Cleveland State University. They reside in Cleveland with their son, Bodhi.