The Unique Finds at the Kent State University Museum

Most people know the Kent State University Museum for its amazing fashion and clothing collection, but among its 30,000 pieces are unique finds in and out of the fashion world that continue to wow members of the Kent State and Kent communities.

Among the many distinctive items, the museum has 3,200 pieces of American collectible glass from Jabe Tarter and Paul Miller who lived in Akron, Ohio. The collection demonstrates the creativity and entrepreneurial spirit of the glassmakers of Ohio, West Virginia and Pennsylvania.

A Rembrandt etching literally hides within the walls of the museum. To protect it from damaging light, the etching is hidden underneath a door that visitors slide open to view the work. Per request of the donor, the etching is always on display in the museum.

The museum has grown substantially since its creation in 1982, amassing 30,000 different pieces compared to the original 5,000 that were donated originally.

The Designer and Fashion Merchandiser Who Started It All

The original 4,000 garments and 1,000 examples of decorative art in the collection were donated by designer Shannon Rodgers and fashion merchandiser Jerry Silverman, who were partners in Jerry Silverman Inc., a dress manufacturer in New York City. In addition to historic and contemporary dresses, decorative arts and a large library, the collection included dresses from world cultures such as traditional Chinese dresses. 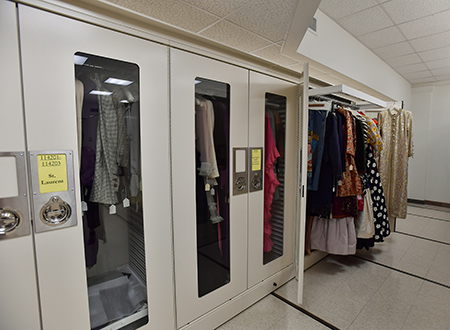 Objects in the original gift spanned from the 18th century to the 1980s. Mr. Rodgers worked in Hollywood in the 1930s and was fascinated by both period fashions and the glamorous gowns of the film stars.

By chance they discovered Kent State in the mid-1970s, and Kent State’s then president Brage Golding, Ph.D., suggested a curriculum in fashion design and merchandising, and the creation of a museum for the collection.

“The gift of the collection, which included the clothes, the decorative objects and the books, established the museum,” says Jean Druesedow, director of the Kent State University Museum. “The state of Ohio matched the value of this collection with capital improvement funds for the building. The collection was valued at $5.3 million, and they took the $5 million appropriation and renovated the original Kent State Library into a state-of-the-art museum facility.”

The Kent State University Museum opened to the public in 1985.

Ms. Druesedow says that when the collection was given, it was considered the finest collection in private hands, and it is well known throughout the United States, with strengths in rare 18th- and early-19th-century fashion. She believes the collection is especially strong in 20th-century couture, thanks to Mr. Rodgers’ connections with European and American designers, and their clients.

Ms. Druesedow is proud that many of the objects in the collection have come from donations that have contributed to the international reputation of the museum. The museum’s major criteria for adding to the collection are aesthetic.

“We want the pieces that demonstrate the finest work by the designers in terms of materials and craftsmanship,” Ms. Druesedow says. “The paintings and decorative arts in the museum give context to the fashions that are displayed.

“The most important pieces in the museum are the examples of high fashion,” she continues. “They are what we are known for around the world.”

A Taste of Hollywood at the Museum

Recently, one of the most substantial gifts came from the estate of one of Hollywood’s leading ladies Katharine Hepburn.

Between 2007 and 2010, Ms. Hepburn’s estate approached Ms. Druesedow to take the actress’s personal collection of performance clothes. This collection featured work from some of the finest designers working in theatre, film and fashion for the 66 years of Ms. Hepburn’s career.

This collection of performance clothes included couture garments by Valentina, Muriel King, Chanel and other very important theater designers. The exhibition has traveled to seven different venues and returned to the Kent State University Museum this February.

“Savannah Clark of Washington, D.C., gave the museum a large and important collection of hats,” Ms. Druesedow says. As an African-American, Mrs. Clark believes that her hats are a very important part of her culture, and once said, ‘I never leave the house without a hat,’ so that is what we titled the exhibition.”

Ms. Druesedow says that what makes the museum especially important for Kent State students is that they can make an appointment to come and see an object that is in the collection just as if it were a book in the library.

“You can’t check it out, but you can come and examine it in the museum,” she says.

Ms. Druesedow encourages all to come check out the current exhibitions at the museum, especially this February when the exhibition Katharine Hepburn Dressed for Stage and Screen is featured. Admission is free for students, faculty and staff with their Kent State ID.

For more information about the current exhibits on display at the Kent State Museum, visit www.kent.edu/museum/current-exhibits.

For more information about museum hours and admission, visit www.kent.edu/museum/hours-visitor-information.