Walking in the Steps of Opioid Addicts Using GPS

Driving through the streets of Ravenna on a weekday afternoon, you probably wouldn’t notice anything out of the ordinary. Gray clouds hover overhead. A steady hum of traffic lurks in the air. A mom pushes a stroller down West Main Street. But as a Ravenna police officer looks at the parking lot of a popular fast food restaurant, it sparks haunting memories of a quiet killer lurking around everyday people in broad daylight.

“The bathroom is very common for heroin overdoses in this area,” recalls the unidentified officer. “We have them all the time in public bathrooms. I can’t tell you how many times we’ve responded to this address for somebody laying down in the bathroom almost dead because of heroin. We ‘Narcan’ them back.”

The officer is on the front lines of the epidemic. According to the Ohio Department of Health, in 2016, the state’s opioid epidemic continued to evolve to stronger drugs, driving an increase in unintentional overdose deaths. The data shows a significant increase in overdose deaths involving the opioid fentanyl, the emergence of more powerful fentanyl-related drugs like carfentanil, and indications that cocaine was used with fentanyl and other opiates. A total of 4,050 Ohio residents died last year from unintentional drug overdoses, more than half (2,357) involved fentanyl and related drugs.

In an effort to learn more about the epidemic’s impact on the county, and ultimately come up with effective ways to fight it, the Portage County Health Commissioner Joseph Diorio reached out to Kent State University Professor Andrew Curtis, Ph.D., co-director of the university’s GIS|Health and Hazards Lab in the Department of Geography within the College of Arts and Sciences.

“We are exploring various options within our communities to decease opioid use and prevent associated deaths in Portage County,” Commissioner Diorio says. “Community collaboration is key.” 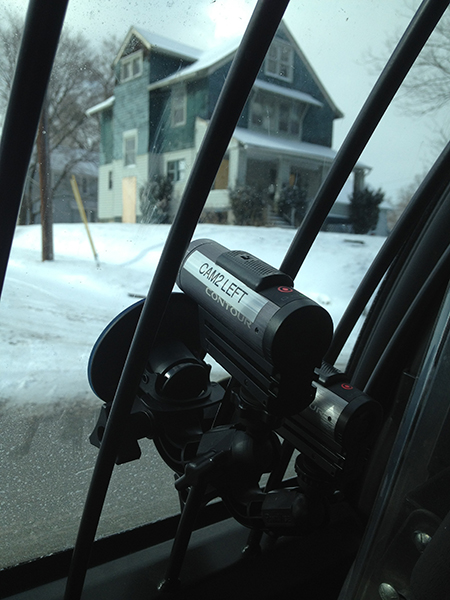 Dr. Curtis specializes in cutting-edge geospatial technologies and geographic information system (GIS) analysis to map events that impact a community – past and present. His projects, to name a few, include mapping cholera in Haiti, the Khmer Rouge “killing fields” genocide in Cambodia and the homeless populations in Los Angeles.

With the help of graduate students in the GIS|Health and Hazards Lab, who have designed multiple software programs, Dr. Curtis drives around with up to four cameras in a vehicle. As the team proceeds through the areas affected by heroin, GPS records the location and the cameras record the scenery. To provide an added dimension of data, an expert rides along to share stories, memories and other information relevant to a given location, as is the case of the Ravenna officer.

“We pioneered this method,” Dr. Curtis says. “We have researchers at top-tier research universities such as Stanford, the University of Southern California and the University of Florida collaborating with us because of our expertise in this field.”

“The software helps to relate the data spatially,” Mr. Ajayakumar says. “You get the pattern and the map, as well as see the videos, and hear the narrator all at once. This gives you an exploratory view of the location.”

Dr. Curtis and his crew drive around a variety of different locations. With the maps and the narration from experts, the software pulls together spatial patterns to paint a picture that official data alone cannot.

“You can see the microspace, but at the same time, you can start to put together the bigger pattern in terms of where the drugs are coming from,” Dr. Curtis says. “If they’re from a place like Chicago or Detroit, you start to see overdoses occurring on the pathway from these places to Ravenna, Streetsboro, Akron and Kent. There is a spatial sequence that emerges.”

That sequence opens up the opportunity to save lives. The data helps explain not only where people are overdosing, but why and helps detail the conditions leading up to the overdose. As a result, the information gives experts an idea of where naloxone (generic form of Narcan), intervention and education are most needed.

Too often, in the areas where overdosing is abundant, the local agencies lack the resources to collect data.

“They are stretched just to do their job instead of trying to figure out solutions,” Dr. Curtis says. “What we are doing here is to provide additional information to the people who are making decisions to identify the different strategies moving forward.”

For the research to be successful, Dr. Curtis reaches beyond his department and collaborates with other experts on campus. Eric Jefferis, Ph.D., professor in Kent State’s College of Public Health, is analyzing the data gathered and helped secure a grant for the work in Ravenna. In addition, Ye Zhao, Ph.D., professor in Kent State’s Department of Computer Science, is leading his team to design new software that will be used by the Ravenna Police Department.

“We collaborate because of the different skill sets and connections people bring to the table,” Dr. Curtis says. “Eric is an expert in criminology – plus he has extensive local, state and federal connections. He found a small money source for us. The guys in computer science and I have a National Science Foundation grant to work on community-focused software development. They are obviously the technical folk.”

The work would also not be possible without seed funding through the new Kent State Healthy Communities initiative.

“We wouldn’t have been able to help in the way we are without this seed grant,” Dr. Curtis says. “It allows us to fund students to do a lot of the data manipulation and processing. And at the same time, it reinforces the Kent State-community partnership that is so important to the mission of the GIS|Health & Hazards Lab.”

Due to an epidemic proportion of overdoses, the project does not have a target end date. Dr. Curtis plans to continue gathering and mapping data in hopes of providing opportunities for solutions.

“I find interest in trying to solve problems,” Dr. Curtis says. “I don’t like to do anything without a purpose, a reason for it, whether it’s international or in Portage County, these are topics which are important.”