Poetry kiosks written for Traveling Stanzas through Kent State University’s Wick Poetry Center, in the College of Arts and Sciences, have found their home in downtown Kent for months and recently expanded to eight Kent Campus locations.

Traveling Stanzas first began in 2009 as a community arts program and was a collaboration between the Wick Poetry Center and visual communication design students.

The kiosks feature posters designed by Kent State visual communication design students and alumni, and an audio button, which when pushed reads the poem in the author’s voice.

“This is an exciting opportunity to literally thread the unique conversation of poetry through people’s everyday lives in new and unique ways,” says David Hassler, director of the Wick Poetry Center.

Students in local K-12 schools, Kent State students, faculty and staff, and members of the community submitted poems for the kiosks. The poems were generated in creative writing workshops led by the Wick Poetry Center. 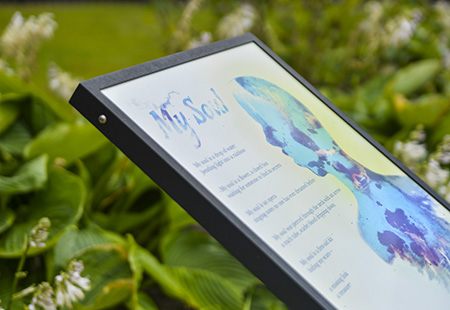 These posters were previously in five locations in downtown Kent, and are now also in eight locations on campus: the Science Mall, the gazebo on Front Campus, outside the Williamson House, outside Henderson Hall, near the Sidney Sculpture on Front Campus, by the Prentice Gate, near Bowman Hall and in the Beyer-Murin Gardens by University Library and Kent Student Center.

Students as young as fourth grade wrote poems, as well as some familiar names on campus.

“We are very pleased that President Beverly Warren’s poem, ‘Praise Song for Kent State,’ is also a kiosk placed near her office in the Kent Student Center area,” Hassler says.

The poems were inspired by different locations on campus and were placed in corresponding locations.

To see where the kiosks are located in downtown Kent and on campus, visit www.travelingstanzasmap.com. For more information about the Wick Poetry Center, visit www.kent.edu/wick.