The Seminar will be directed to reading and responding to the Canterbury Tales and also responding to the most recent scholarship on Chaucer and his milieu. Consideration will be given to Chaucer’s relationships to his English and Continental influences; to his literary, cultural, and artistic contemporaries; to the writers who followed in his footsteps, and to various contemporary methods of analysis. Three-hour sessions will be held each weekday morning, with optional group lunches and individual consultations on research projects supplementing these meetings. The Seminar’s work will be accomplished through deliberative close reading and engaged discussion, with a focus on significant passages. Visits by distinguished guest scholars will provide additional intellectual resources.

Week One is devoted to the texts of Fragments I and II: the General Prologue and four tales. The week will begin with an orientation to the Seminar and the Kent State University campus, followed by a Welcome Dinner.

Week Two is devoted to the seven tales of Fragments III, IV and V, highlighted by the visits of guest speakers Richard Firth Green and Robert J. Meyer-Lee. Green will discuss the place of folklore and the fairy realm in Chaucer’s culture, especially in relation to the Wife of Bath’s and Friar’s Tale. Meyer-Lee will talk about the relations of poetry and political power in the 1400s, and the theoretical and practical implications of modern presentations of the Canterbury Tales.

Week Three is devoted to the two tales of Fragment VI and six tales of Fragment VII. The week begins with a visit by Ardis Butterfield, who will speak to the Seminar on Chaucer’s Anglo-French ties and multilingual influences. The week will also include a visit to the Cleveland Museum of Art, with a guest lecture and tour by Curator of Medieval Art, Stephen Fliegel.

Week Four is devoted to questions of closure as we read the four tales in Fragments VIII, IX, and X, the sequence that concludes the Canterbury Tales in almost all complete manuscripts. The Seminar’s last three meetings will have participants present their projects to the group. The week’s events will include a trip to Akron’s Stan Hywet Hall and Gardens, where we will view the Chaucer mural that lines the Manor House’s formal dining room. 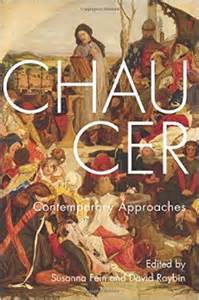