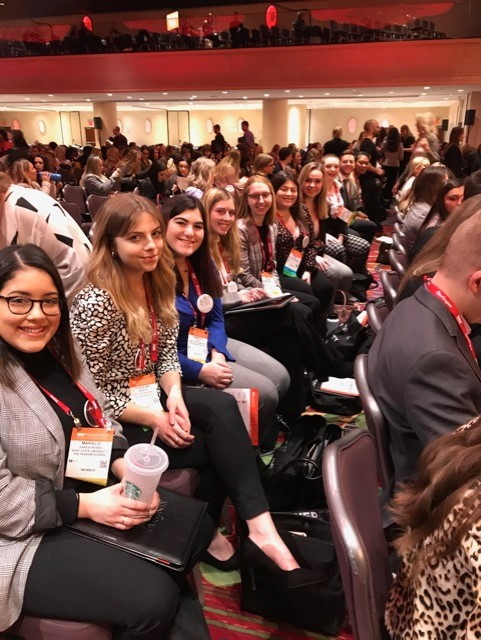 Elizabeth Heibertshausen found herself in familiar territory last month when she returned to the National Retail Federation stage for the first time since 2014.

Heibertshausen, a 2014 fashion merchandising graduate from the School of Fashion Design and Merchandising at Kent State University, was honored as a guest speaker during the National Retail Federation (NRF) Foundation’s Student Program 2020 in New York City in January. Heibertshausen was featured on the panel “Rise in Retail: A Young Professional’s Panel” that was composed of current retail rock stars in the industry, who discussed their previous NRF Foundation experiences and scholarship program experiences that led to their professional success.

Heibertshausen is the former recipient of the 2014 Next Generation $15,000 scholarship offered annually by the NRF Foundation. She currently serves as the associate product manager for women’s sleepwear at Kohl’s, at their corporate office in Wisconsin, working with many of Kohl’s leading brands such as Lauren Conrad and Sonoma. She got her start as a product development intern at Kohls while a student at Kent State.

During the “Rise in Retail” panel, Heibertshausen was one of just three asked to speak. During the discussion, she spoke about her current role within Kohl’s, provided tips on how to prepare for their dream job in retail, provided advice on career development and gave helpful interview tips. She also discussed how she knew she wanted a career in fashion retail.

“I was always interested in fashion, but I thought the only thing you could ever do in retail was be a designer or be a buyer,” said Heibertshausen, “I’ve always had this interest in it, and then I realized that fashion merchandising was a possible career for me or a possible major for me; that really allowed me to learn so much more about what retail has to offer. Then once I got into my internship, I learned how many opportunities there are in retail and that’s how I landed in product development.”

While at the event, Heibertshausen had the opportunity to connect with current Kent State students who were in attendance. Lauren Prior, a senior fashion merchandising student, qualified as a top 10 semi-finalist for the prestigious Next Generation Scholarship. She was one out of just 25 students chosen nationally to compete for this scholarship. “My next generation scholarship journey began in March of 2019 and just came to an end celebrating at the NRF Foundation Honors Gala in New York City. The journey was full of challenges and ultimately was a huge catalyst for my growth! I’m so proud to be a Next Generation Top 10 Scholar,” said Prior.

Her advice to current and future students interested in applying for the Next Generation Scholarship – take a chance. “If you have any interest at all in the Next Generation Scholarship, my piece of advice would be to go for it and don’t look back! This isn’t something you are required to do for school; nobody is going to make you do it. But if you have the drive and commitment this is an opportunity to grow and develop in ways you never have before.”

Additionally, freshman merchandising major Kristen Kubek was honored as the NRF Rising Star Scholar for Kent State University. “NRFSA and the Rising Star Scholarship enabled me to listen to inspiring speakers and seek future internship opportunities,” expressed Kubek. “It was incredible to visit New York City for the first time and learn more about the industry! I’m so glad to be able to start networking as a freshman.”

It is because of students like these, that Heibertshausen continues to play an active role at Kent State. She travels to the Ohio campus several times a year with Kohl’s as part of their internship program, while also serving as a mentor to students by giving them advice, reviewing their portfolios and participating in mock interviews to help prepare them for life after college.She is thankful to have a continued relationship with her alma mater. “Speaking on this panel is quite honestly one of the proudest moments of my retail career and I still thank the School as the foundation for getting involved with the NRF from the start,” expressed Heibertshausen. “I still use my professors and my network at Kent to reach back out to if I ever need anything.”

The 2020 NRF Student Program was the highest attended to date. Over 1,100 students from more than 130 universities across the nation participated in the four-day conference. The annual event is held every year in New York City and is designed specifically for undergraduate students. To date, the Foundation has awarded over $1.5 million in scholarships and has trained over 50,000 undergraduate student job seekers and has engaged with over 100 retailers as part of their program.

The NRF Foundation builds the bridge between a growing industry with hundreds of thousands of open positions and job seekers around the country. Through education, training, scholarships and experiences for job seekers of all ages and backgrounds, they help more people take their first steps toward promising careers. The NRF Foundation is the 501(c)(3) philanthropic arm of the National Retail Federation and is funded in part by generous donations from retail industry supporters.