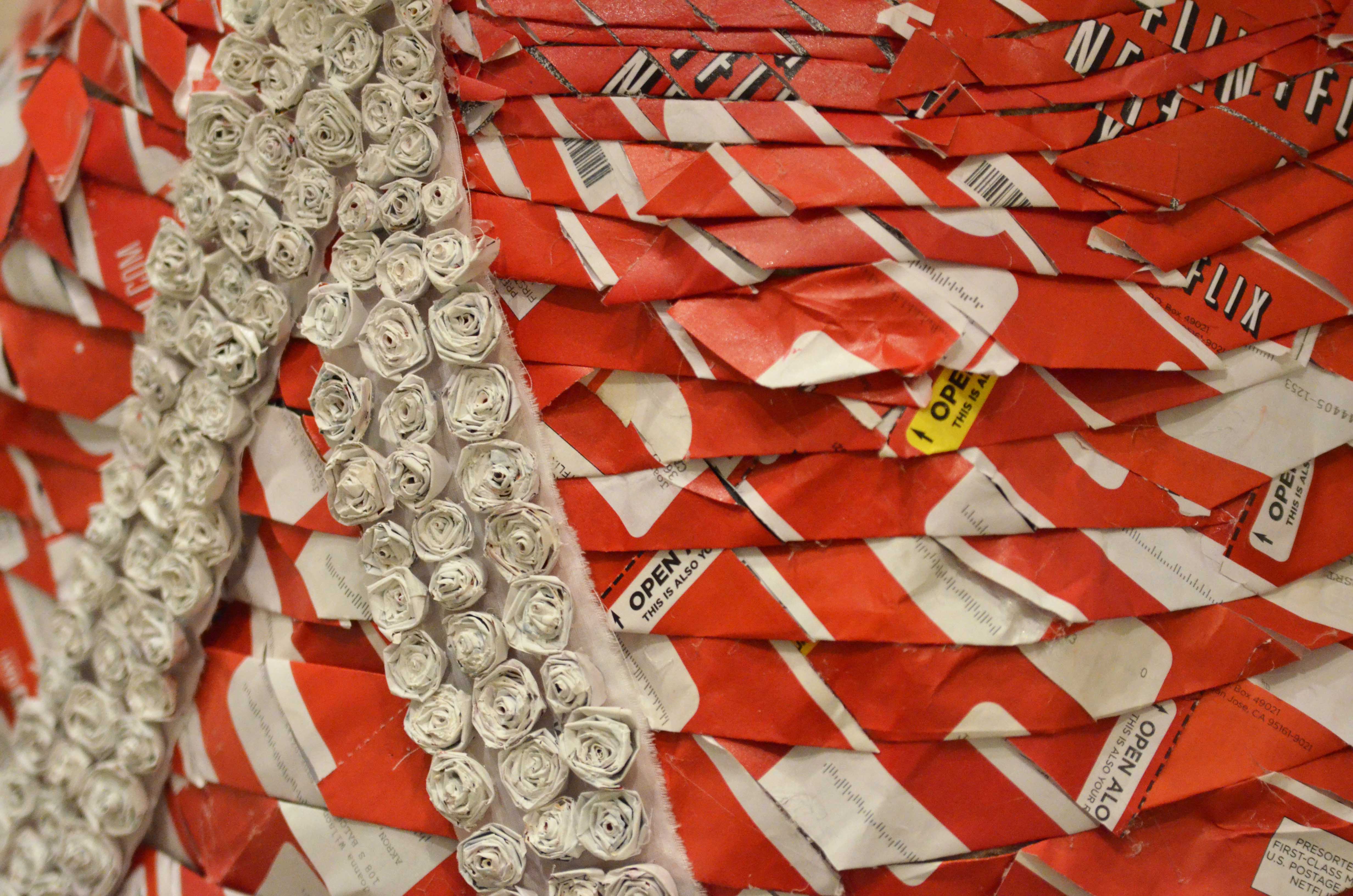 Kent State Fashion School student Alyssa Hertz has created her fair share of non-traditionally made garments over the years, and last month was no exception when she unveiled her one-of-kind gown made from a collection of more than 1,500 DVD Netflix envelopes.

Hertz, a sophomore design major, was chosen by Akron resident, Joanna Wilson, to create full-length, wearable gown of out of the red DVD Netflix envelopes that enclose the discs in the mail.

Wilson, a Christmas entertainment writer and author of the book “Tis the Season TV: The Encyclopedia of Christmas-Themed Episodes, Specials and Made-for-TV Movies,” has been collecting the envelope sleeves since 2005 after noticing their durable texture. 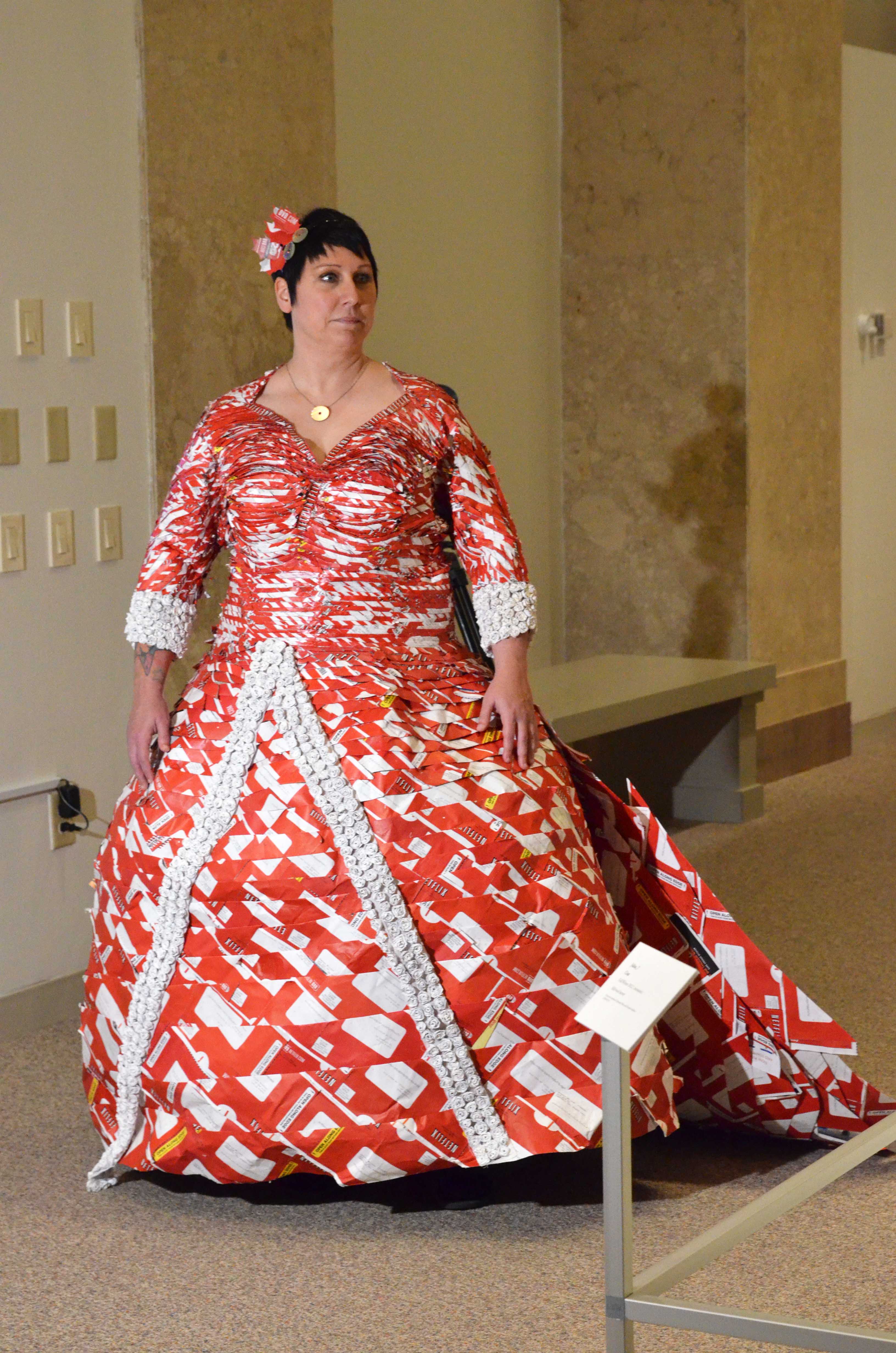 “I first started saving them because I noticed that the paper the DVDs were shipped in was an unusual texture – these envelopes have to endure being sent through the rain and the snow. I'm a crafty person and I imagined that one day I would upcycle them into an outfit or a dress. Now, 13 years later, I'm pleased my dream is finally coming true,” said Wilson.

Hertz first heard about the opportunity from a family friend who saw the original interview with Wilson on WKYC Channel 3 - Cleveland News. A few days later, she received an email from the Fashion School announcing the opportunity in more detail and she knew she had to apply.

Before coming to Kent State, Hertz crafted quite a few unconventional projects such as a Styrofoam wedding gown, a dress made entirely out of newspapers, a faux flower dress and a necklace made from hardware materials. It was this creative design history that impressed Wilson. “I selected Alyssa because she stood out from the crowd. She is articulate, confident and she has a passion for fashion. She also impressed me with her past experiences working with non-traditional materials.”

The creation of the dress, which was sponsored by DVD Netflix in celebration of their 20th anniversary, was modeled after Rosemary Clooney’s dress in the popular Christmas movie “White Christmas.” The dress features 526 handmade paper flowers and was composed from the material from approximately 693 envelopes.

“I cannot even begin to count how many hours I spent on this from the middle of August to the beginning of October, or how many sticks of hot glue I used. I spent so much time using my hot glue gun on this dress that near the end of the project, it actually caught fire. I had to buy a new one to finish the dress!” exclaimed Hertz. 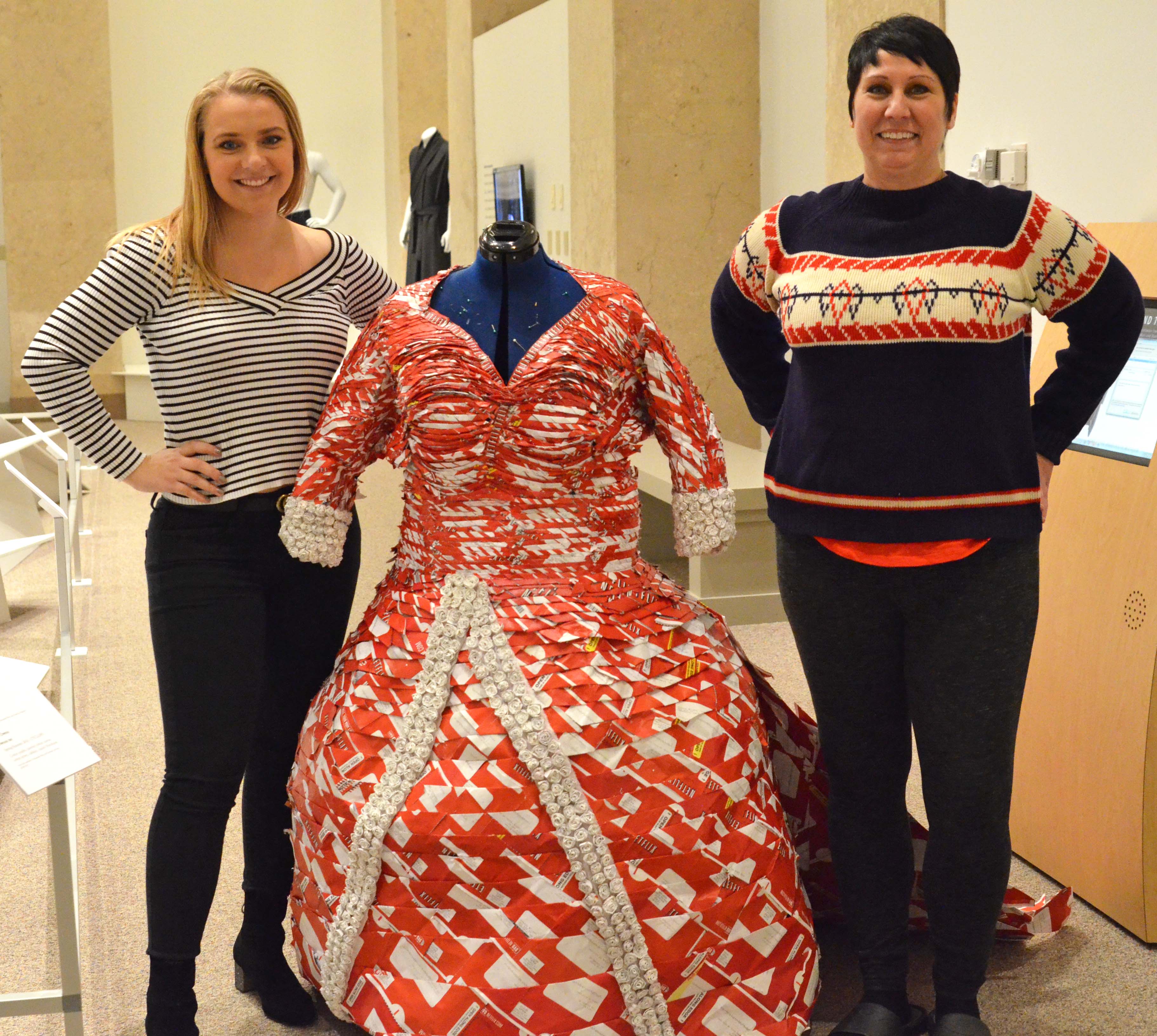 WKYC and DVD Netflix officially unveiled the dress to the public on November 12 and was met with positive reviews. Said Wilson, “It was exciting to see so many people interested in our project. I felt a little shy wearing the dress and posing for photos with strangers, but I'm also proud of the work Alyssa accomplished and honored that people find this project as fascinating as I do. This has been an unforgettable experience.”  Added Hertz, “Making this dress was an incredible experience, and it pushed me to create something I never dreamed I would make. It taught me a lot about myself, and a lot about who I want to be as a designer. I feel very thankful and blessed that I was given the opportunity to continue to show the world what I love.”

The dress will be on display in the Kent State University Museum in the near future, so make sure to like and follow the KSU Fashion School and KSU Museum for updates!

To read the official interview with the duo from DVD Netflix, visit the DVD Netflix blog. To see the WKYC interview and video of the unveiling, visit this link.

Image 2
An up-close look at the details of the Netflix Dress.