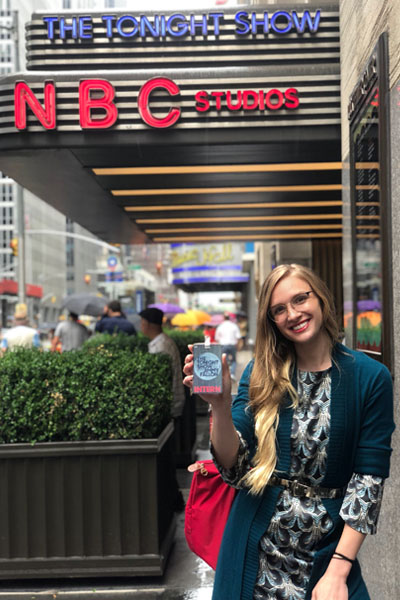 Throughout her internship, she aided in the procurement of costumes for the show’s costuming division, and also helped with general office organizational tasks for the department. Luciano spent most of her time near the costuming office which meant crossing paths with many of the show’s celebrity guests.

“On many occasions I was less than two feet away from some of the show’s celebrity guests such as Tina Fey, Amy Adams, Justin Bieber, Steven Tyler, Big Sean, Pusha T, Keith Urban, Florence and the Machine, the Backstreet Boys and of course the one and only Jimmy Fallon,” said Luciano. “When Tom Cruise was there, he actually smiled and said hi to me, and I got to show Bebe Rexha to her room before her musical performance.”

One of her highlights from the entire experience was getting to work on the popular sketch “Ew!” in which Fallon and a celebrity guest play teenage girls who are constantly disgusted by the people and things around them. Luciano got to assist on the “Ew!” sketch featuring Brittany Spears.

“There were so many elements to that sketch, and I was avidly helping them prepare for it for weeks. Once it was time to air, the costuming team invited me to watch the live performance of the skit on the tv located inside their office,” expressed Luciano. “That was one of my finest memories from the experience, not just because I got to see the final product, but because of the warmth that the costuming division showed me.”

Another one of her favorite memories came from a meet-the-staff meeting with one of the show’s main sketch writers. “The words that will stick with me the most from this internship came from one of the show’s writers. He told us that when you are in a creative job, if you aren’t shocked, looking for an explanation, or excited about what you’re creating, then you should move on because it has probably already been done before,” she revealed. “As a creative individual, this really made me think. Since then, I’ve begun to practice this mantra and it has really made a difference in how I approach new projects, whether it’s for work or for my hobbies.”

“The Tonight Show Starring Jimmy Fallon” airs weeknights at 11:35 pm ET on NBC. For a list of upcoming guests or more details about the show, please visit www.nbc.com/the-tonight-show.