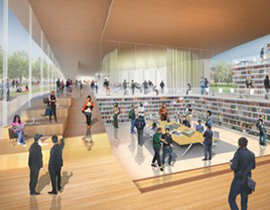 A new architecture building is part of the university’s campus transformation, called “Foundations of Excellence: Building the Future,” which involves the construction of new buildings, facility upgrades and establishment of dynamic, new spaces. The goal of this initiative is to create the most outstanding academic experience for students, faculty, staff, alumni and the greater community enriched by the university.

Kent State is hosting a design competition for the new architecture building to be constructed along the Kent State University Esplanade extension near downtown Kent. The estimated cost of the new building is $40 million. Currently, this signature program is housed in three separate structures. A new building will unite the college under one roof.

“We are certain with the talents of the firms that are vying for this project, the end result will be a building that is a fantastic addition to our campus, an icon for one of Kent State’s signature programs and a model of forward-thinking, sustainable design that will inspire a generation of future architects,” said Michael Bruder, director of design and construction at Kent State’s Office of the University Architect.

Generating Excitement in the Architecture Profession

Internationally recognized architects have already applied, giving Kent State a wide range of candidates to choose from. In all, 37 entries were received.

“This list of architects is unprecedented for a Kent State project,” said Douglas Steidl, dean of the College of Architecture and Environmental Design at Kent State. “This is truly a significant list of 37 teams. Those who have applied include Zaha Hadid, who is deemed the leading female architect in the world; Coop Himmelb(l)au, who created the Akron Art Museum; Thom Mayne of Morphosis; and numerous other designers of note. Seven of the teams contain AIA National Firm Award winners, geographically located from Boston to Seattle. Many are recognized for their work across the country and around the world.”

The architecture firms that entered the design competition were:

Narrowing Down the Field

In mid-October 2012, the field of 37 entries was narrowed down to eight. Interviews with the eight firms are being conducted in later October and early November. The eight firms were:

On Nov. 19, 2012, the university announced the finalists, narrowing the field to four firms and offering a stipend for design solutions from each of them. The four teams selected for the last stage of the design competition are:

On Jan. 17, 2013, the four selected teams will present their design concepts, sustainability data and a cost estimate to the selection committee, followed by an abbreviated presentation that will be open to the public, including College of Architecture and Environmental Design students and faculty (see press release). While the sustainability data is analyzed and the cost estimate will be reviewed by independent sources, the presentation materials will be further evaluated by the jury to determine the winning design scheme.