Six representatives of the Kent Central Gateway project met with Ohio members of Congress and officials at the Federal Transit Administration.

Six representatives of the Kent Central Gateway project, which includes the City of Kent, the Portage Area Regional Transit (PARTA) and Kent State University, visited Washington, D.C., on April 16 and 17 and met with Ohio members of Congress and officials at the Federal Transit Administration. The goals of the Kent delegation’s visit were to thank those in Washington who had supported the efforts to secure funding for the Kent Central Gateway multimodal facility as well as to update officials on the progress of the downtown Kent’s economic development project 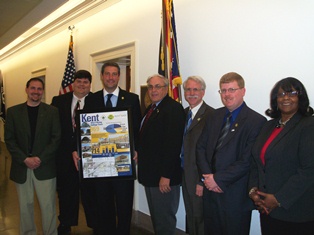 The delegation was pleased to meet with Brian Farber, associate administrator for Communications and Congressional Affairs of the Federal Transit Administration at the U.S. Department of Transportation, and Congressman Tim Ryan. Additionally, the delegation visited the offices of Sen. Sherrod Brown, Sen. Rob Portman and Congressman Steven LaTourette and met with their economic development legislative aids.

“This was a wonderful opportunity for our partnership of the city, PARTA and the university to showcase the great things that are happening Kent, Ohio, as we redevelop the downtown area,” Fiala said. “Through this collaboration and our public-private partnerships, we are creating a better and more beautiful downtown, creating jobs and creating a great quality of life for our community to be enjoyed by our residents, students, employees and visitors.” 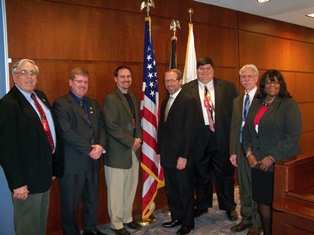 Major areas of discussion during the delegation’s meetings included:

The downtown Kent project, one of Northeast Ohio’s shining examples of public-private partnerships. To date, more than $100 million has been invested by the City of Kent, PARTA, the Burbick Foundation, the Kent State University Foundation, Fairmount Properties and Kent State University to redevelopment the downtown area. This is a five-to-one leverage of the $20 million Transportation Investment Generating Economic Recovery (TIGER) program that was awarded by the U.S. Department of Transportation and funded through the American Recovery and Reinvestment Act for the Kent Central Gateway multimodal facility.
Nearly 1,000 construction jobs created and more than 700 permanent jobs committed.
A ribbon-cutting ceremony scheduled for August when the Davey Tree Resource Group and Ametek, Inc. take residence in their new buildings in downtown Kent.
A planned memorial dedicated to all Portage County veterans to be designed and erected at the entrance to the new Kent Central Gateway multimodal facility.

For more information on the Kent Central Gateway, visit www.kentcentralgateway.com.