Professor Analyzes Ancient Crater in the Gulf of St. Lawrence

Joseph Ortiz, Ph.D., a professor of geology at Kent State University, is part of a team of scientists who recently co-authored a publication about a rare, multi-ringed, complex-impact crater of unusually small diameter in the Gulf of St. Lawrence (Eastern Canada). 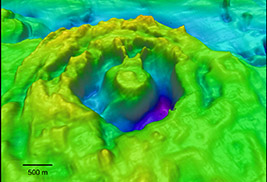 His colleague, Patrick Lajeunesse, Ph.D., from Laval University, who was the lead author and lead principal investigator on the project, first reported the discovery of the crater in 2001. In addition to Ortiz and Lajeunesse, the team consisted of Jacques Locat of Laval University, Guillaume St-Onge of  Université du Québec at Rimouski, Mathieu J. Duchesne of the Geological Survey of Canada and Michael Higgins of the Université du Québec at Chicoutimi.

Ortiz assisted with some of the sedimentological and physical properties analysis and in the interpretation of these results. He has also been working with members of this team to study paleoceanographic changes that occurred over the past several tens of thousands of years in the marginal waters of the Canadian Arctic and Subarctic.

"One of the things that excites me about science is the thrill of the discovery of the unknown,” Ortiz says. “Our team was not looking for this feature, but when you find something like this, your scientific curiosity leads you to solving the mystery of its origin."

The article, which appeared in the international journal Meteoritics and Planetary Science, described the four-kilometer diameter and 185 meter-deep crater lying on the seabed at greater than 40 meter water depths with a central uplift and concentric rings, features characteristic of a complex impact crater. The impact origin of the crater is suggested by its shape, and a rock fragment recovered from the crater surface that shows, under the microscope, evidence of impact-related melting and shock-induced structures. These features indicate intense temperature and pressures that are consistent with an impact-related origin. The absolute age of this impact structure is unknown, but its geological setting indicates that it was likely formed long after the Mid-Ordovician (470 million years ago) and before Quaternary glaciations (2.6 million years ago).

The crater was named the Corossol Crater after the name of a ship from the fleet of King Louis XIV, which wrecked in the area in 1693.