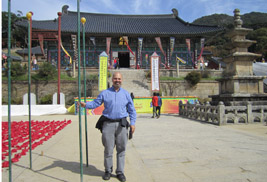 which he says is probably the best-known Korean

Buddhist temple in the south of the country.

In October, David Kaplan, Kent State University professor of geography, attended a fellowship in South Korea with seven other professors and publishers to explore the country and learn more about its culture. Kaplan was selected through an application process in August.

“I think South Korea’s biggest concern, as a country, is people are just not terribly aware of it,” says Kaplan. “People don’t know where it is, they don’t know what the Koreans have accomplished and they don’t know much about its history.”

Kaplan found out about the fellowship through a colleague who pointed him to the Korea Society’s website. He thought he would be a good fit because he is always interested in learning and writing about new places. He has written two geography textbooks that are used for college courses and high school AP courses. Kaplan feels texts are the best way to disseminate information about a different country.

“If I know more about Korea, I’ll be able to introduce that into the textbooks,” says Kaplan. “That will then allow more students around the country to learn more about its history and progress.”

The experience began in Seoul, which Kaplan describes as an enormous and impressive city. He attended a series of lectures about the country given by a number of different scholars.

“We stayed at the Academy of Korean Studies, which is a little bit south of the city,” says Kaplan. “It’s a place where all these researchers work together on various aspects of spreading more knowledge about Korea and look at what other countries are doing.”

The group then traveled to various cities in southern South Korea, visiting a number of historic sites and learning about historical figures. A highlight of the trip for Kaplan was spending a night at a Buddhist nunnery.

“It was a temple filled with female monks,” says Kaplan. “We ended up going there, sleeping there, getting up at 3 a.m. to pray, chanting at the temple and experiencing the Buddhist lifestyle.” 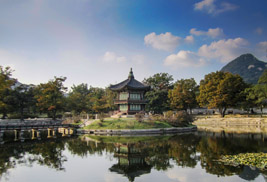 Pictured is a pagoda at Gyeongbok Palace, the home of

the last Korean dynasty, in the northern part of Seoul.

Kaplan says the biggest culture change he experienced was getting used to how often the Koreans take off their shoes in public to enter different facilities.

“Of course they take off their shoes to go into the temples and houses, but sometimes they even take their shoes off to go into stores and restaurants,” says Kaplan. “That was something that I was aware of, but I was amazed at how often it occurred.”

Kaplan was stunned by how urbanized the country has become, from being 80 percent rural in the 1960s to 80 percent urban today. As an urban geographer, Kaplan feels that this is the fastest urban transition of any country in the world.

“Most Koreans used to live in these small little houses, and now they all live in really tall apartment buildings because they think it’s better than having your own house,” says Kaplan. “The country really has just changed and is incredibly wealthy.”

While many people have focused on Japan and China, Kaplan believes that South Korea has quietly transformed itself into an advanced, industrial and modern country — more modern than the United States.

“It’s just amazing how much Korea has advanced, and I only got to see a part of it,” says Kaplan. “But just from my walks around some of the towns and cities, I was able to see how contemporary Korea has become.”