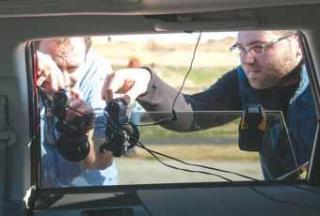 Jan. 30- Article (and video) in The Plain Dealer

An Ohio professor is using advanced mapping techniques to examine rebuilding in Joplin for clues that might explain why some neighborhoods recover after a disaster but others don’t.

Andrew Curtis is the director of the Geographic Information Systems Health and Hazards Lab at Kent State University, and his work has taken him to some of the biggest natural disasters in the United States over the past seven years, including the Gulf Coast after Hurricane Katrina and Tuscaloosa, Ala., after its 2011 tornado.

Curtis tracked the path of destruction from Hurricane Katrina in 2005 at a street-by-street level using methods similar to those used by Google Street View.  He was in Joplin over the weekend, his fifth visit since the storm.  “We have a street view of all of these roads that were in the path of the tornado,” Curtis said. “We are looking at why places returned and how they got there. We are  mapping how a community grows and develops in the face of a disaster like this.”  The mapping will examine what role might a church, park or school play in a neighborhood’s recovery, for example.

Equipped with a Subaru Outback and three high-definition video cameras mounted on it, on this visit he studied the roads that he and his crew traveled near 26th Street to see how much work still had to be done.  Curtis said he will compile roughly 60 hours of video over the weekend that he will then compare with his previous video.  He hopes to isolate factors that limit growth, in addition to creating a visual narrative for areas that have experienced major disasters.

“In situations like Joplin, you can see the anchoring of neighborhoods that have rebuilt, and it spreads from there,” Curtis said. “We are articulating the land changes and providing a context of where growth will occur. In addition to mapping that growth, the applications that others can use this for are nearly limitless.”  Steve Smith, a geography professor at Missouri Southern State University, was providing local assistance.  “We will be using this information for years to come by tracking patterns of change,” Smith said. “In effect, we are still mapping, but it is happening in such a different way. We aren’t showing one picture or one isolated frame here. Instead, this is a bigger scope by explaining the why of how an area changes and that is handled visually. Putting it together makes you realize the impact of how this area will rebuild over a long enough timeline."

Curtis said he will keep tracking the rebuilding for as long it takes.  “I plan on returning here often to keep this project going over the next five years,” Curtis said. “I want to keep filming until there is no further visible change to the area. I want the community of Joplin to benefit over the long term from this work, and the filming that I am doing will be available to anyone who can put it to use locally.”

The Kent State University experts in town this weekend are only the latest who see in Joplin a real-world lab to study disaster issues. Students and faculty from the University of Oregon, Haverford College in Pennsylvania, Drury University and the University of Arkansas have been here studying everything from immediate disaster response to urban planning; the role photographs play in families, society and history; and post-traumatic stress disorder.

Story taken from The Joplin Globe