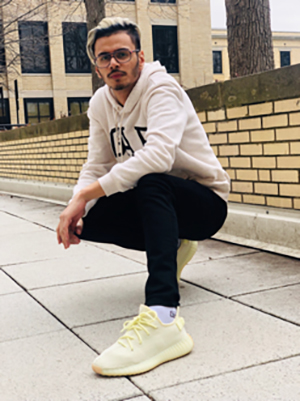 Arham Jain is a sophomore international student studying global communication. He’s from the northern state of Punjab in India, and he celebrates the unique culture of this region that he calls home. Arham says, “People say Punjabis are very energetic, very bubbly, and, sometimes, very loud. We are just ourselves—we’re not afraid to be who we are. We like to make connections with new people and make those people as family. This is how Punjabis are.” Even though he loves India, he hopes to spend his life travelling the world and immersing himself in new, exotic cultures.

Arham’s fascination with global culture has shaped many aspects of his life, but none more so than his education. Although he started off as a marketing major, he changed paths in order to pursue his international ambitions. He hopes his degree in global communication can land him a position at an international nonprofit. “I would love to work for an NGO,” he says, “because I'm oriented more towards helping others than just making money.” After graduating, he wants to continue his international experiences by working abroad. He adds, “It doesn’t matter where I am though. Canada, Europe, Africa... As long as I’m fulfilling my passions, I’ll be happy.”

Arham chose to study in the United States because he sought the prestige of a “world recognized” degree. He began his college career at West Virginia University, but soon realized it wasn’t a good fit. He explains, “I didn’t really find it inviting for international students, so I looked up universities with a bigger emphasis on diversity. I saw Kent State on numerous lists of top public schools for international students, and that grabbed my attention.” He also was impressed by the variety of academic opportunities available to all students—especially the study abroad program in Florence, which he plans to take part in himself.

In the year and a half since he’s been here, Arham has fallen in love with Kent State. He says his favorite feature of Kent is the welcoming atmosphere: “There are so many different people from all over the world; I have friends from Brazil, the Netherlands, the UK, and all across America. Each of them has an amazing story to tell about where they come from, but we all feel at home here at Kent.”   In his free time, Arham likes to play videogames, write poetry, and—occasionally—play volleyball. He also likes to spend time at one of his favorite places on campus: the ice arena. “I like to skate,” he says, “and it’s just a cool place to be. Not many places have that kind of thing, but Kent does. It makes [the campus] special.”

Arham thinks that everyone should try to “invest in themselves.” To him, this means taking the time to develop the qualities that make each person unique. He advises, “Get out of your comfort zone. Go out more. Meet new people and talk to them—I mean, really talk to them. Get to know the people and the culture, and enhance your own personality and personal skills in the process.”