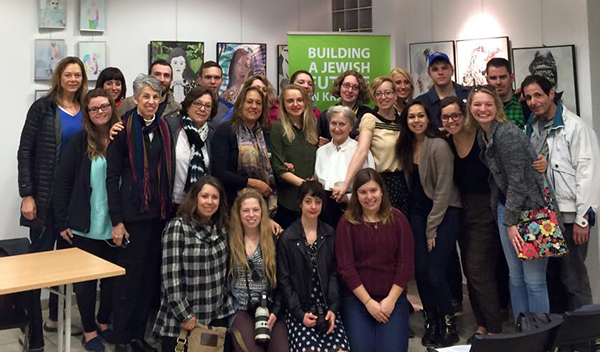 During Spring Break 2015, 22 KSU students travelled to Poland to mindfully walk the streets, hallways and corridors of the most infamous locations associated with the Jewish Holocaust of World War II - Warsaw, Krakow, Auschwitz and Birkenau. Hosted by the Jewish Studies Program, the trip to Poland became a journey of perception and remembrance for the students as they received a firsthand look at what it was like to be a Jew in Poland during the Holocaust. Afterwards, the students reflected – often tearfully – on their spiritual and humanistic need to undergo the journey and its impact on their lives and relationships. For them, the trip was not just about seeing the social progress of Poland. Instead, it became an immersive experience by which they truly understood, felt and experienced the devastating impact the Holocaust had on individuals, families and nations.

Spring 2015 was the first time this trip was undertaken and it was very well-received by the 22 students who went. Miranda Nicasio, a senior who attended the trip, tried to put words to the experience. “This is now a tie that will keep us together forever. We all keep in touch and we went through this together. It’s something that the other courses can't reach. It’s a bond you can only share with the people you went with.” According to Nicasio, everybody had that moment when they truly realized where they were and the horrific events that happened there. “My moment was when we were in the barracks where they kept the sick women to ‘help them and make them feel better’ but they were just leaving them there to die. They didn’t care about them. They just needed somewhere to put them so everyone else didn’t get what they had. That’s when I had my breaking point.”

"(The trip) is something all students can appreciate. It was not necessarily just for Jewish students, history majors or art majors. There were also chemistry, photography and communication majors," explains Chaya Kessler, the Director of the Jewish Studies Program at Kent State University and the faculty member who led the study abroad program. "Something which made this experience even richer was that students were required to do an end-of-semester project of their choice. Students got together a few weeks after the program and shared their presentations. Many did essays, poems and photography. It was very sensitive and you could tell they were really affected.”

A Jewish woman raised in Israel, Kessler is extremely passionate about the experience and how it can elevate a student's education. “This experience isn’t necessarily better than others. But it’s an experience that has depth. It puts everything into perspective. Survivors die and it’s so important for the rest of us to remember,” Kessler said.

"It wasn't just a history lesson students were learning about, but a contemporary lesson in human dignity and human suffering," explains Kristin Stasiowski, the Director of International Programs and Education Abroad for the College of Arts and Sciences. “Human dignity is still something we strive for and human suffering is still something we face. This journey should be seen as an investment in yourself and an investment in the people who supported you and the world you are going to go out and change.”

The study-abroad trip to Poland proved so successful and meaningful to the students, that another similar trip is planned for Spring Break 2016. Next spring's trip begins in Warsaw, which includes visits to the Museum of the History of Polish Jews and the Monument to the Ghetto Heroes. Students then travel to Krakow where they get a chance to visit Oskar Schindler’s enamelware factory. The trip concludes in Auschwitz-Birkenau where students will see the infamous labor camps. Students also get the rare chance to listen to speakers, professors and a Holocaust survivor. The one credit-hour course costs approximately $3,000 and includes round-trip airfare, housing, entry fees, some meals and tuition. Scholarships are also available for interested students.

“Now is the time to pick this trip because the people who experienced the Holocaust and hid the Jews won’t be around much longer. It questions whether young people today would do that. People like that still exist," adds Nicasio, "It gave me hope for humanity in the future.”

“No matter where you go, if you’re going with an open mind, you’ll come back with an amazing experience.”
Chaya Kessler