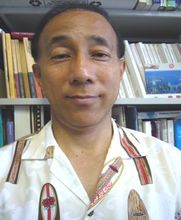 Monographs are the centerpiece of what academic historians do. This year, we're happy to feature the current monographic project of Dr. Brian Hayashi. His current manuscript project, tentatively titled Asian American Spies: Race, Loyalty, and the Office of Strategic Services during World War II, is under contract with Oxford University Press for publication. The manuscript is complete and awaiting (sixteen months and counting!) editing before publication. Based on archival materials gathered from libraries from London to Shanghai and many others in between, the study examines Chinese, Japanese, and Koreans who worked for the Office of Strategic Services, the precursor of the CIA, against the Imperial Japanese forces during World War II as spies, propagandists, translator/analysts, and guerrilla warfare specialists. It poses a question at the beginning--which of these Asian Americans in the OSS is a double agent? The book then carries the reader through the different sections of the spy agency, their varied backgrounds, and ends with these Asian Americans conducting war crimes investigations after the war. With this last task, they come to grips with a number of Asian Americans who collaborated with the Imperial Japanese forces, with one earning the nickname, “Lord Haw-Haw of Asia” for his vehement anti-Allied radio propaganda broadcasts. The book continues with a discussion on the meaning of loyalty, a question raised by the Asian Americans serving the Allies when they confronted others of similar background and citizenship who chose the Axis side. And it answers the question posed at the beginning—which one was the double agent?

Dr. Hayashi additionally has the contours of another research project in the works, on the rise and decline of "Yellow Peril" racialist ideology. He still has an estimated three more years of research work to complete, but some of the salient features of this study has already emerged. Starting with the late nineteenth century, the study examines how the rise of the “peril,” as defined by top Army and Navy officers, became associated with “yellow” (Asians) as they feared an overwhelming number of potential soldiers (Chinese) might be armed, trained, and transported by a technologically advanced Asian country (Japan) to invade the militarily vulnerable western half of the United States. Their fears were soon allayed by unlikelihood of the “yellow” combining forces by the early decades of the twentieth century once the tensions between China and Japan appeared insurmountable. Communicating those initial fears to the public, however, proved useful to the armed forces when it came to budget appropriations negotiations in the 1910s and 1920s. Over the next decade, the “yellow” as the military saw it, increasingly became restricted to the Imperial Japanese military forces and not applied to the whole Japanese “race,” let alone all Asians, as some scholars allege. Top Army and Navy officers alike were quick to dismiss the “peril” of an invasion before, during, and after the Pearl Harbor attack and began working with their civilian counterparts to integrate Asians into the armed forces of the United States.

They immediately implemented this policy with Chinese and Koreans at the start of the war and intended to apply the same to the Japanese once their segregated combat units gained sufficient publicity to counter the Japanese propaganda that America wanted a Pacific "race war." Once World War II ended, and with China wracked by a civil war, the "Yellow Peril" narrative came to an end as these same military officials recognized the “yellow” was hopelessly divided and, in its place emerged a new “peril” color-coded as “red.”