As the lead flight controller for all the Apollo space missions, Sy Liebergot was a key player in the U.S. space program

As the lead flight controller for all the Apollo space missions, Sy Liebergot was a key player in the U.S. space program. Liebergot was at the focal point of the Apollo 13 crisis and played a prominent role in bringing the crew back to Earth safely. 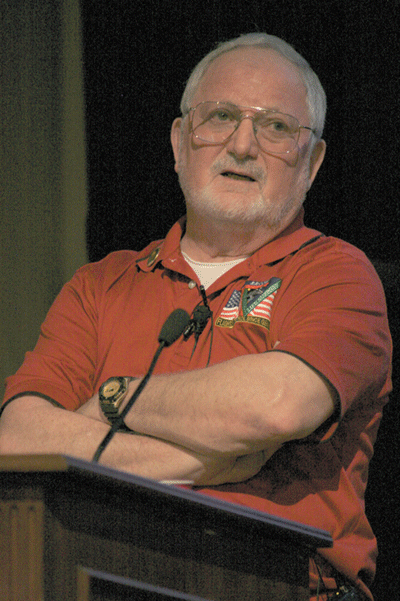 On Monday, Oct. 4, Kent State University will host three public events with Liebergot. He will offer insight into decision making in the U.S. space program, discuss his role in the aborted Apollo 13 moon mission and sign copies of his autobiography “Apollo EECOM: Journey of a Lifetime."

Liebergot was the Lead Electrical, Environmental and Consumables Manager (EECOM) Flight Controller throughout all Apollo manned missions and worked on all of the Skylab program missions. When an oxygen tank explosion caused severe damage to the Apollo 13 spacecraft, Liebergot was a member of the team that helped save the lives of the three-person crew.

On the international front, Liebergot was the Lead EECOM for the American-Russian Apollo-Soyuz Test Project mission. He contributed his experience to early shuttle missions and to the space station design. As a senior project engineer, Liebergot directed the design and fabrication of the astronaut neutral buoyancy trainers for the International Space Station.

Liebergot has contributed to several projects concerning Apollo 13, including the “Apollo 13” movie directed by Ron Howard and the multimedia CD-ROM “Apollo 13, A Race Against Time.”  He appeared in the acclaimed PBS documentary “Apollo 13: To the Edge and Back” and on the History Channel, the National Geographic Science Channel and the Discovery Channel.

For his role on the Apollo 13 operations team, Liebergot was awarded the Presidential Medal of Freedom. He also has received the NASA Commendation Award for his leadership role in the Apollo-Soyuz Test Project international space mission. He remains an active booster and international public speaker of NASA's space accomplishments and the importance of a good education.

Ethics in Engineering
2:15 – 3:30 p.m., Room 115 of Van Deusen Hall
Liebergot will examine how ethical decision making (or the lack thereof) played a role in the three tragedies of the U.S. space program. Drawing on his experience as an Apollo mission flight controller, Liebergot will provide some insight into the heart-wrenching decisions engineers may face.

Apollo 13: The Longest Hour
7:00 – 8:30 p.m., Kent Student Center Kiva
Liebergot will speak about what it was like to be a flight controller in Mission Control when a massive failure occurred during the Apollo 13 mission. He will relate the details of this life-threatening situation as they really happened.

Reception and Book Signing
8:30 – 10 p.m., Room 204 of the Kent Student Center
Copies of Liebergot’s book, “Apollo EECOM: Journey of a Lifetime,” will be available for purchase.

All of the events are free and open to the public. The events are sponsored by Kent State’s College of Arts and Sciences and the departments of Chemistry, English, Geology, History, Philosophy and Physics.