The Jewish Studies program at Kent State University will present a lecture and book signing by Eva Schloss, stepsister of Anne Frank, on Thursday, April 8, at 12:15 p.m. at the Kent Student Center Kiva. 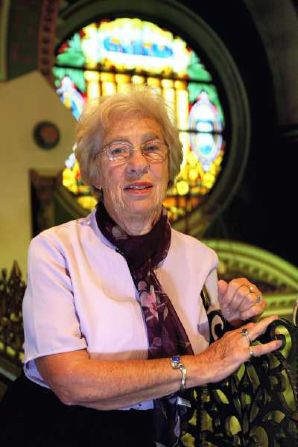 Schloss was born in Vienna, Austria, in 1929. She and her family immigrated to Belgium and eventually to Holland in 1938, shortly after Adolph Hitler annexed Austria. After the Germans invaded Holland in 1942, Schloss and her family went into hiding. In May 1944, they were betrayed, captured and sent to the Auschwitz concentration camp. Only Schloss and her mother survived.

After the war, her mother married Otto Frank, father of Anne Frank. Anne Frank’s diary, her account of hiding from the Germans during the occupation of the Netherlands, was first published in 1950. Initially popularized through play and film adaptations, it is now one of the most widely read books in the world.

“We are honored to present this event with Eva Schloss, the last living connection to Anne Frank,” said Richard Steigmann-Gall, director of Kent State’s Jewish Studies program. “This is a rare opportunity to hear from this important figure in history.”

Following the lecture, there will be a 30-minute question and answer session with Schloss and a book signing at 1:30 p.m.

Since 1985, Schloss has been active in Holocaust education. She received an honorary doctorate in civil law from the University of Northumbria in Newcastle, England, and is a trustee of the Anne Frank Educational Trust of the U.K. “Eva’s Story,” written with Evelyn Julia Kent, was published in 1988, allowing Schloss to share her experiences with a wider audience.

In 1995, she worked with playwright James Still in the creation of the play “And Then They Came for Me: Remembering the World of Anne Frank.” Schloss released her second book, “The Promise: A Moving Story of a Family in the Holocaust” in 2006. She currently lives in London with her husband Zvi.

The lecture is free and open to the public. The Schloss lecture at Kent State is sponsored by B'nai B'rith of Youngstown, Kent State Jewish Studies and Hillel at Kent State. For more information, contact Richard Steigmann-Gall at rsteigma@kent.edu or 330-672-8924.