Kent State University will present a series of three recent Spanish films on March 2 and 3. The films will be shown in the auditorium in the Schwartz Center (Room 177), and will be in Spanish with English subtitles. A discussion will follow each film. Admission is free and free parking is available at the Schwartz Center. 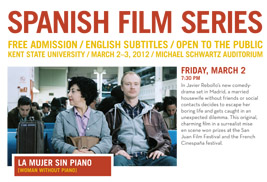 The films featured in this event include:

La Mujer Sìn Piano (Woman Without Piano) Friday, March 2, 7: 30 p.m.
In Javier Rebollo’s new comedy-drama set in Madrid, a married housewife without friends or social contacts decides to escape her boring life and gets caught in an unexpected dilemma. This original, charming film, in a surrealist mise en scene, won prizes at the San Juan Film Festival and the French Cinespaña festival.

Los Condenados (The Condemned) Saturday March 3, 2 p.m.
In this 2009 thriller by Isaki Lacuesta, an exiled Argentinean who has lived in Spain for more than 30 years receives a phone call from a former comrade. The friend begs him to come home to help find the remains of a political activist who disappeared during the dictatorship.

Paisito (Small Country) Saturday March 3, 7: 30 p.m.
This film by Ana Dièz is set in Uruguay, a “paisito” or little country. It recounts the events surrounding a coup that took place in 1973 shortly before the coups in Chile and Argentina. The film presents the overthrow of the government by the military and the eradication of the Tupamaros through the lens of two adults who meet 20 years after they first met as children.  An intriguing and subtle film.

This Spanish film series is made possible with the support of the Spanish Ministry of Culture, the Kent State’s Institute for Applied Linguistics and the Department of History.