In 2011, University Housing kicked-off a comprehensive energy-saving project in the residence halls to make the buildings more energy efficient. As part of Kent State University's commitment to reduce the residence halls' energy consumption 20% by 2014, several new building retrofits have been installed and will be visible for students. 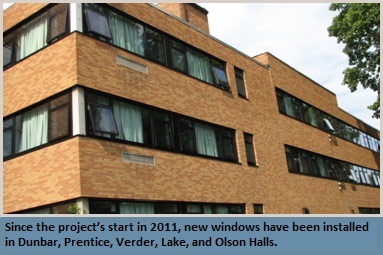 Perhaps the most visible upgrades have taken place at Dunbar, Prentice, Verder, Lake, and Olson Halls as new windows were installed to provide more effective containment of the building's desired temperature. During those long Ohio winters, the heating system will be able to conserve more by working less to maintain a comfortable atmosphere for residents.

For those students living in Centennial Court, Stopher, Johnson, Dunbar, Prentice, Verder, Lake, Olson, Engleman, Beall, Korb, and Allyn Halls – you'll notice lots of new additions to your room's heating and/or cooling controls. These residence halls  received occupancy sensors in each of the student rooms which are designed to communicate via wireless network to the room’s heating and/or cooling controls. 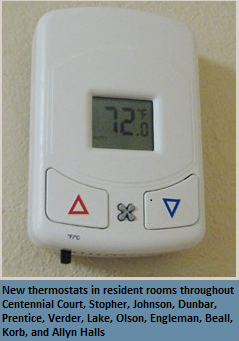 Just like at home, residents can control the temperature in their room with an individual thermostat – however to reduce wasted heating/cooling energy, the new occupancy sensor (which detects motion in the room) is designed to alert the thermostat when no one is present in the room. Rather than heat or cool an unoccupied space, when the “unoccupied” signal is sent to the thermostat, the temperature is allowed to rise/fall (within a controlled range) to reduce energy consumption. The instant a resident returns to the room, the sensor will then return the thermostat’s set temperature to the student’s desired level.

Please note, while students are in the room, we recommend using the "auto" setting on the thermostat to fully maximize the energy efficiency of the room’s temperature control. 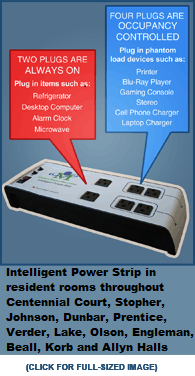 Also now available in Centennial Court, Stopher, Johnson, Dunbar, Prentice, Verder, Lake, Olson, Engleman, Beall, Korb, and Allyn Hall is an “intelligent” power strip, which automatically cuts electrical power to phantom load devices while no one is in the room. Why is this important? Items like video game consoles or DVD players often use power even when they are turned off. For example, a Nintendo Wii console can draw as much as 18 watts while powered off!

Note that two plugs on the strip are NOT occupancy sensitive and remain powered-on AT ALL TIMES.  Critical items such as your refrigerator and alarm clock should be plugged into these two plugs to ensure they remained powered-on at all times!