Kemple Keeps Gorilla Suit At His Desk in Case of Emergencies

It might be because of the gorilla suit he keeps at his desk in case of emergencies. Or the fact that he attributes his passion for world change to his spirit animal, Yoko Ono. Either way, Kemple is anything but "run-of-the-mill" in his position at the Public Library of Cincinnati and Hamilton County.

Although he has pursued a library career, Kemple never strayed far from first love, however — art.

“When I was a kid, my mom had an art history textbook that I used to look through,” he said. “I remember being enraptured by images of paintings by Rembrandt and Vermeer. Here were these other worlds, so exquisitely rendered, and I wanted to inhabit them. Just looking at them wasn’t enough.”

Wandering the stacks in the library was the closest Kemple said he had come to entering the world of those paintings. He now wants to share the experience with other people, whether it is in a gallery or at a library reference desk.

At the Art Academy, Kemple studied painting, but also was interested in using different media — photography, performance, installation, video, sound and online media — to express this yearning to enter other worlds.

“My work as an artist currently tends to veer conceptual,” Kemple said. “A lot of what I do could be described as social practice or relational aesthetics, which basically means I make art by constructing situations where people can interact with each other and the world in unique ways. I’m generally interested in art that’s participatory and engages with communities and institutions.”

The Library as Canvas, and Stage

Around the time Kemple was thinking about studying library and information science, he was working at an artist-run gallery called CS13, where he said everyone was committed to doing projects that critiqued existing social structures while providing a viable alternative through social practice.

“I started thinking about the library in the same light,” Kemple said. “When I started in Kent State’s SLIS program, it was like putting these different ideas into a crucible where they started melting together. Pretty soon, I couldn’t tell where my art work ended and my library work began. I don’t see them as different at all now. For me, being a librarian is a work of art. The library is my canvas, and the communities we serve are my audience.”

Kemple said the Foundations of Library and Information Science course in SLIS in particular, is where he first started seeing how art, social practice and libraries could fit together.

Then, in Organization of Information, Kemple said, “I began thinking deeply about the metaphysical implications of information, which is a theme that informs my work as a visual artist today.”

Kemple currently works as a reference librarian in the Popular Library Department at the main branch of the Public Library of Cincinnati and Hamilton County, where he oversees a music collection of more than 100,000 CDs and nearly 10,000 LP records. The department also includes fiction books, audiobooks, movies and graphic novels, as well as a small selection of popular nonfiction titles. His day-to-day activities include collection maintenance and programming for adults, in addition to helping people find what they’re looking for. He also runs the library’s CD of the Month club, which he established three years ago and which has about 800 active members.

Kemple extended his love of music by linking the library with the community through an ongoing partnership with the Cincinnati Symphony & Pops Orchestra. For its annual One City Symphony performance, Kemple works with the symphony to present a library program about the music, usually with the members of the symphony discussing the music. For almost every performance, Kemple creates a display of library material, including CDs of the music they’re performing, biographies of the composers and other materials relevant to the program’s themes. These events are part of his bi-monthly series called “Listen to This!” where music centered on a different theme each week is played.

“Sometimes [these events] take the form of formal lectures, but more often than not, they’re informal listening-party style events,” Kemple said. “Some of my favorite topics have been music from North Korea, Afrofuturism and the birth of hip-hop, and a profile on the eccentric Australian composer, Percy Grainger. We’ve also listened to all nine of Beethoven’s symphonies at the same time, listened to silence for an hour — the HVAC is surprisingly interesting — and played ‘Record Roulette,’ where we use a random number generator to select LPs from the stacks.”

Every third Saturday afternoon, they focus on a topic on the history of regional music, courtesy of music historian “Uncle Dave” Lewis, who Kemple said “knows more about Cincinnati music than any other person on Earth.”

Kemple is also the curator for the monthly Experimental Music at the Library series, where artists perform and interact with an audience in the library.

“[My manager and I] share a vision of the library as a utopian space where people can come to have deep, intellectually engaging encounters,” Kemple said. “I suggested we try to put on a few performances of experimental music to reach out to Cincinnati’s thriving DIY experimental music community.”

Started in 2012, the Experimental Music program now attracts artists from all over the world, who contact Kemple about performing at the library.

Inspired by artists like David Horvitz, Katie Patterson, Tino Sehgal, Yoko Ono and others who are adept at constructing situations that inspire wonder by subtly altering the world around them, Kemple said that as both a librarian and an artist, his goal is to create conditions where people can be interested and curious about the world.

“A world full of interested, interesting people is the kind of world I want to help create, in whatever small way I can,” Kemple said. “Sometimes it just comes down to being silly and playful with things.”

From June to November of 2015, Kemple was an artist-in-residence at EveryLibrary, a nonprofit organization chartered to work on local library ballot initiatives. As its first artist-in-residence, Kemple spent six months orchestrating participatory events that took place simultaneously at libraries across the country.

“I came up with an overarching theme of ‘We’re In This Together’ and planned a series of events, ranging from silly to hopefully profound,” Kemple said. “Each event consisted of simple instructions that could be easily carried out by any library worker without disrupting his or her work.”

One project, which involved the ALA Think Tank on Facebook, was called “Collective Library Submarine Reference Desk,” where Kemple made an event page, encouraging everyone to play a 12-hour YouTube video of submarine sound effects quietly at their reference desks. Sixty-five libraries in the U.S., Canada and Norway participated.

The project that garnered the largest response was Kemple’s “High-Five A Librarian Day.” The hashtag #High5ALibrarianDay reached more than 11 million people on Twitter alone, with high-fives given to librarians on six continents.

Quoting the philosopher Ludwig Wittgenstein, Kemple said, “If people did not sometimes do silly things, nothing intelligent would ever get done.”

At the Cusp of Avant-Garde

Kemple said he looks forward to where his work will take him.

“I never would have guessed this is where I’d end up,” he said. “I actually thought I’d end up as a teen librarian. I didn’t set out to become a music librarian or curate an experimental music series. Who knows what the next few years will hold?”

For now, he would like to continue using art and social practice to influence the profession.

“I'd like to see libraries everywhere with artists in residence engaging communities and helping libraries approach with new eyes their vital role in the public sphere and wider ecosystem of cultural institutions,” he explained.

“I want to encourage librarians to dare to be weird and think outside the box, to realize they don't need permission to do something spectacular. 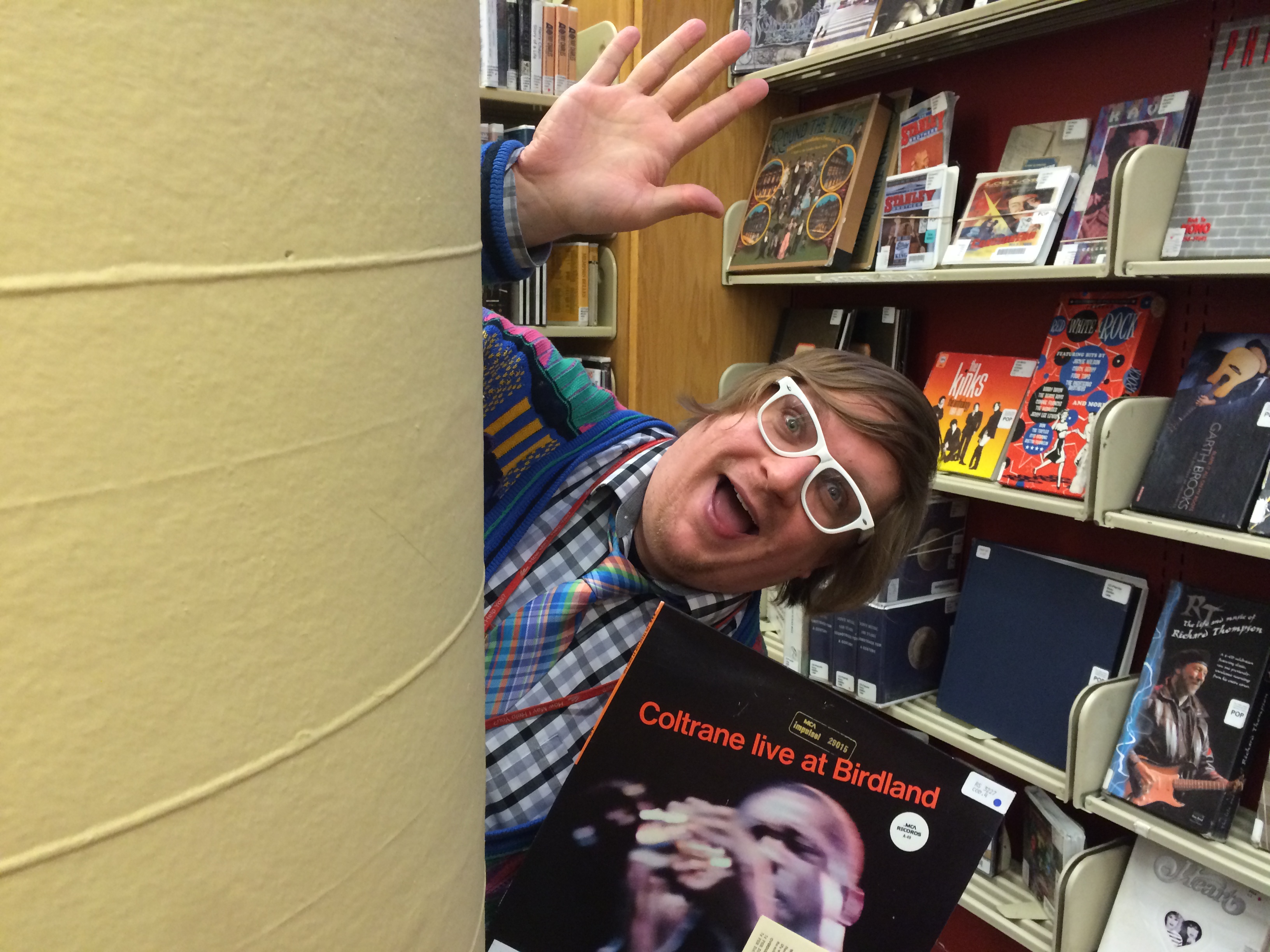