Honored for Dedication to Mentoring Students

Kent State University School of Library and Information Science (SLIS) Alumnus of the Year Bill Barrow, M.L.S. ’98, has been dedicated to mentoring the next generation of librarians for nearly two decades. 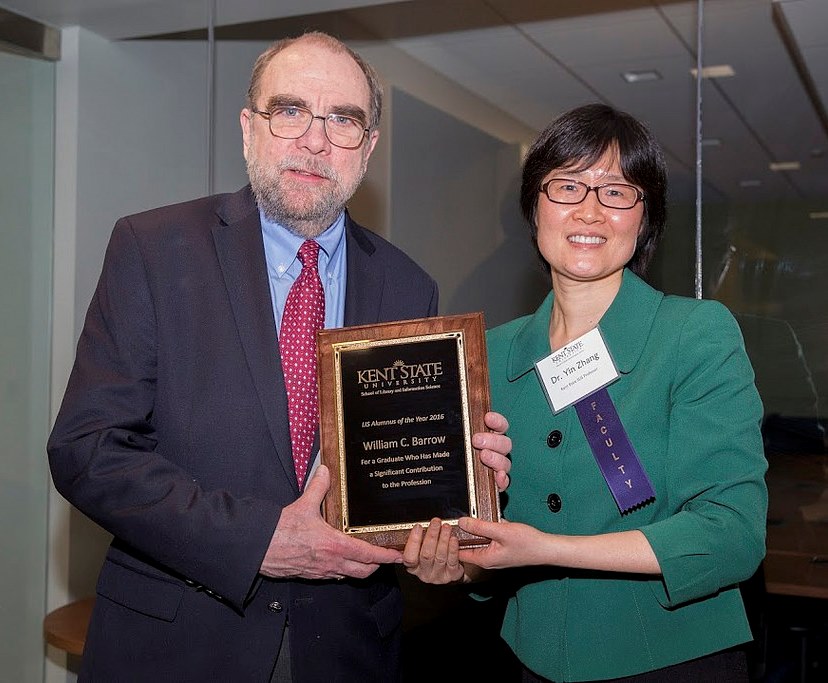 Over the years, Barrow has worked on various projects with at least 70 interns, mostly from Kent State SLIS, in his role as head of Special Collections at Cleveland State University’s Michael Schwartz Library. Most of these efforts involve “digitally transforming the universe of local history resources for digital preservation and access” — Barrow’s passion and one he shares with the students he mentors. Among the projects for which Barrow is best known are the Cleveland Memory Project, started in 2002, and the Ohio Outdoor Sculpture Inventory, a more recent endeavor.

While a student at Kent State, Barrow worked part-time at Cleveland State University library in an archival capacity. After he graduated, CSU created a special collections library and hired him.

“I think part of why I got hired was not only because I was familiar with the collections, but also because in 1996 I had started putting websites up, and in 1999 that wasn’t a common thing, to have someone with an archival background and a web background,” Barrow said.

More specifically, Barrow was creating web pages on local history resources for specific collections at CSU, some of which became the Cleveland Memory Project.

According to its homepage, “the Cleveland Memory Project, launched in 2002, is a freely searchable online collection of digital photos, texts, oral histories, videos and other local history resources, built by the Michael Schwartz Library at the Cleveland State University in collaboration with a host of community partners around Northeast Ohio.”

Barrow understands what people like, which is why the Cleveland Memory Project features what visitors to the site want to see. For example, the history of downtown shopping is among the highlights of the website.

The impact of Barrow’s work extends beyond Northeast Ohio. The Cleveland Memory Project was featured in a 2012 New York Times article and stands among the early online local history projects in the United States.

Barrow insists that the Cleveland Memory Project would not have been a success without the help from his team and interns.

“I worked with Bill on a practicum in Special Collections at Cleveland State,” Edith Serkownek, M.L.I.S. ’05, said. “For my practicum I worked on the Cleveland Memory Project, researching and digitizing material related to the Mentor Harbor Yachting Club history.”

Students who have internships with the Special Collections at Cleveland State are assigned a project and have to investigate to find what resources are available. They do the cataloging and find something like a film or an e-book, which would serve as a resource for their project.

“Our motif has been to make projects in Cleveland Memory a good training ground for graduate librarians to learn how to do digital projects like this and really own the projects,” Barrow said.

Serkownek is now an associate professor at Kent State University Libraries and said Barrow has continued to stay in touch and be committed to professional development.

In addition to his involvement with the Cleveland Memory Project, Barrow is on the board of The Sculpture Center in Cleveland and works closely with the Ohio Outdoor Sculpture Inventory (OOSI). According to its website, the Michael Schwartz Library at Cleveland State rebuilt the OOSI database and put it on a secure server. Like the Cleveland Memory Project, OOSI has been a source of practical experience for many SLIS interns.

The internships are a win-win situation for Barrow: He gets to guide new librarians, and he learns something along the way.

“It’s always good to have students come up to us and acquaint us with what’s going on back at the library school, what skills are being taught and what the professors are saying,” Barrow said.

Barrow accepted the 2016 Alumnus of the Year award at a SLIS ceremony in April.