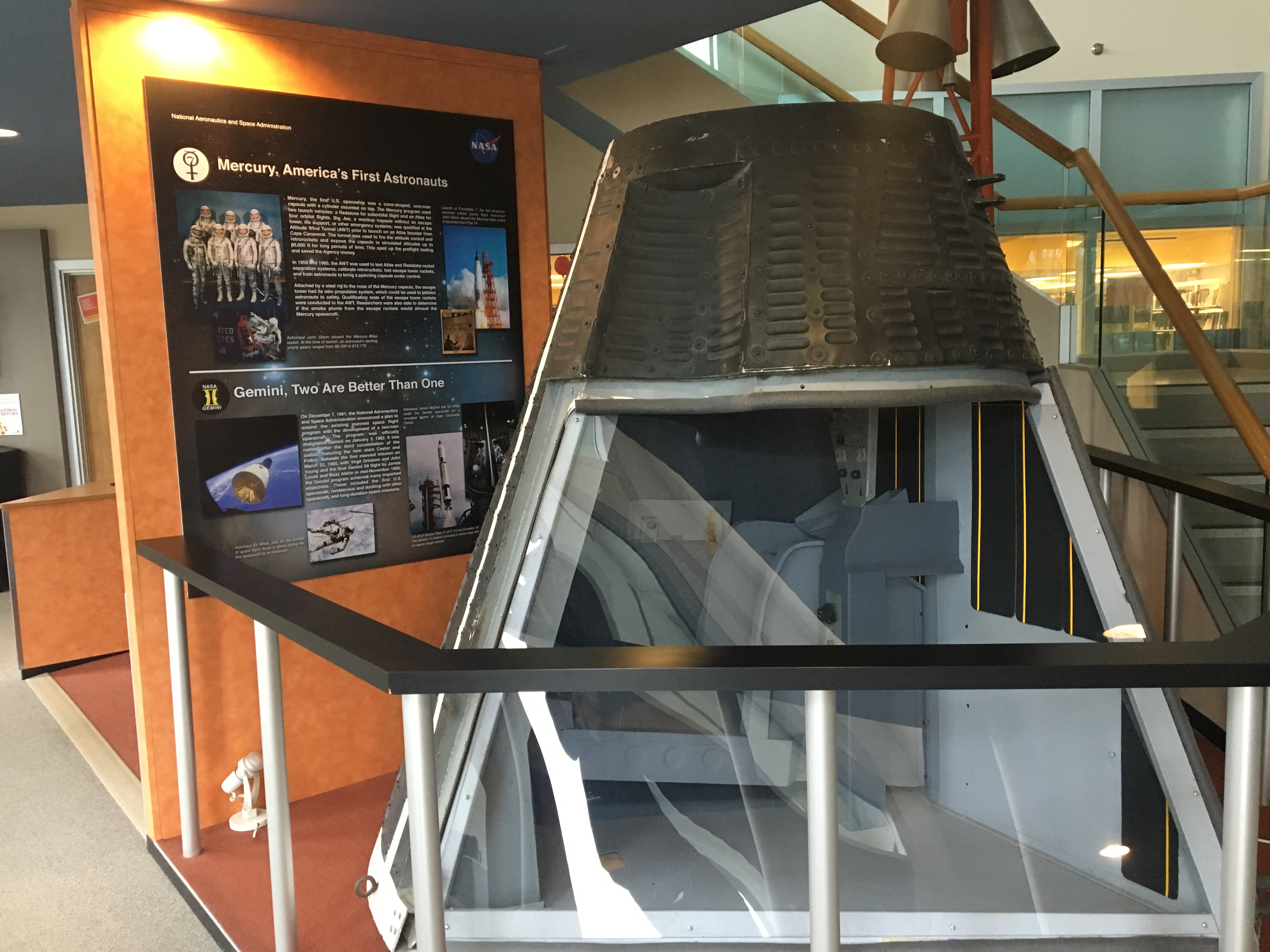 Two little girls in Northeast Ohio had a fascination with space and dreamed of working at NASA one day. Now both of their dreams have come true, with the help of Kent State University’s School of Library and Information Science (SLIS). 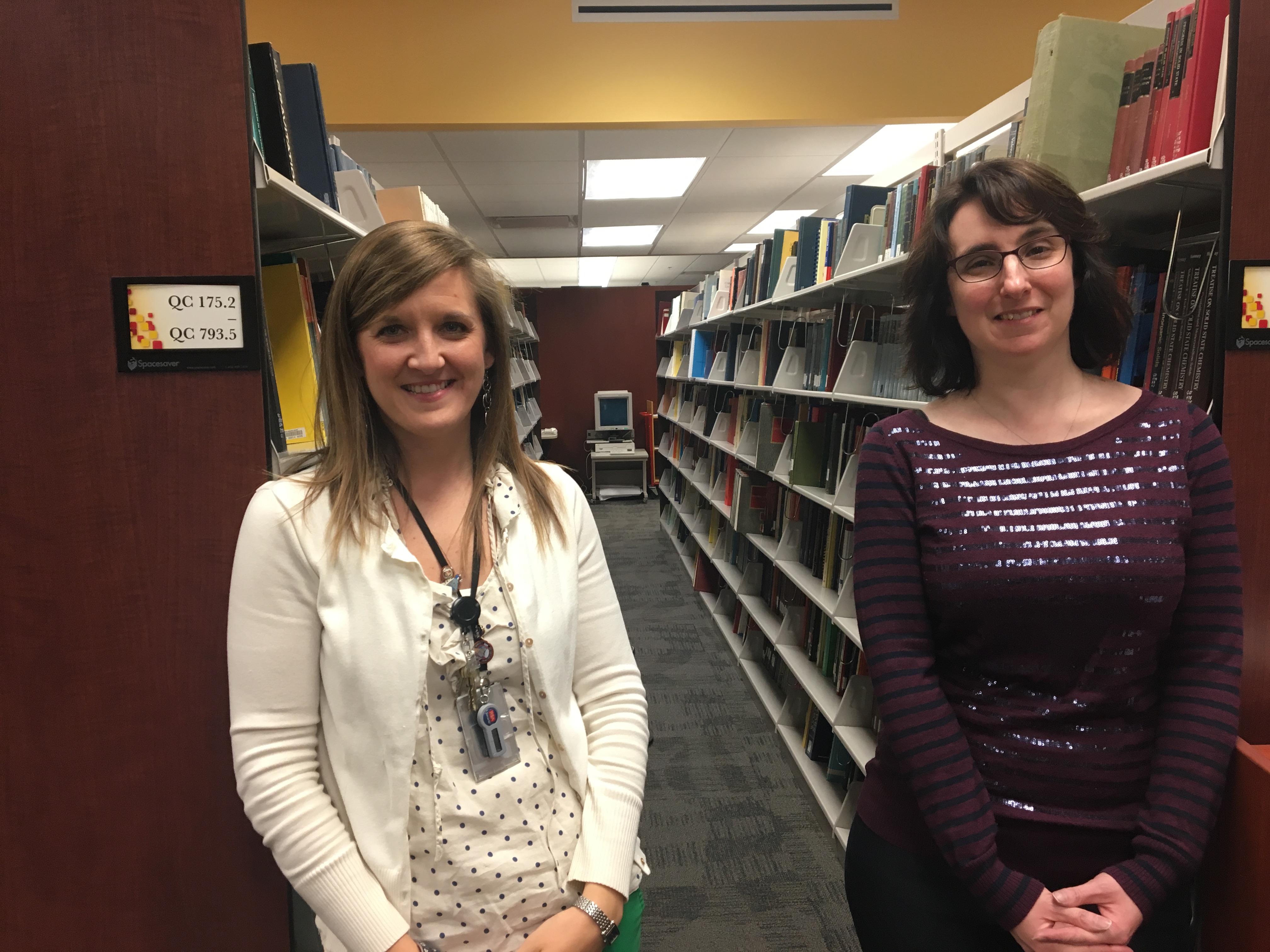 Jaime Scibelli, M.L.I.S., M.S. ’08, worked at Borders book store for a few years before deciding that she wanted more of a challenge. She decided to become a librarian and enrolled in the dual master’s program for library and information science and Information Architecture and Knowledge Management (IAKM) at Kent State SLIS.

“I have always loved space, and I wanted to go to space camp when I was a kid,” Scibelli said. “I knew that NASA was here (in Cleveland), and I knew that they hired people from Kent State.”

Robin Pertz, M.L.I.S. ’13, started her career as a middle school science teacher and went on to work at the Columbus Metropolitan Library to provide homework help. There, she realized she liked being a librarian more than she liked being a teacher.

“I realized I loved it there (the library), and my boss told me I was great at what I did, so I decided it was a great time in my life to go back to school. I finished my degree in less than a year,” Pertz said.

Scibelli, who has been with ATS for nine years, is the library manager and the manager for the history and archives area, where she oversees the day-to-day operations of the library and provides extra research assistance when needed. Before she became the manager, Scibelli was the science librarian; Pertz, who has been with ATS since 2013 after completing her practicum there, now holds that title. Her position involves helping the scientists find the resources they need to complete their research.

“Before I was the science librarian, I was in an embedded librarian position, so I would handle a lot of the research that would come out of the Simulated Lunar Operations (SLOPE) lab,” 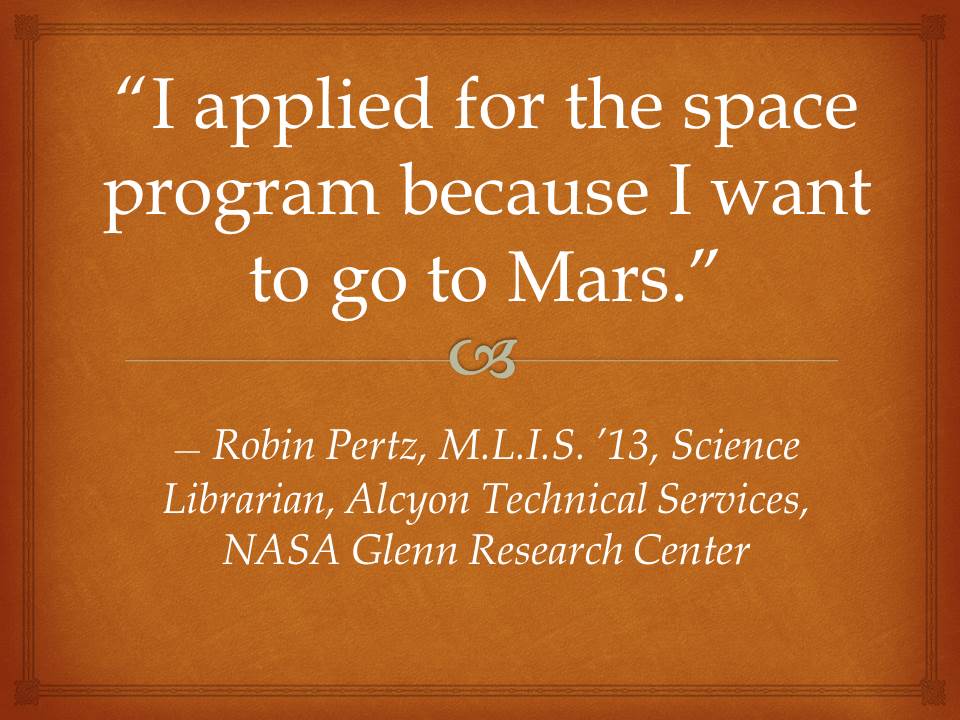 Pertz said. The women had to go through extensive background checks as a condition of their employment as government contractors, which is standard for anyone who wants to work at a government facility like NASA Glenn.

Both had a variety of interests while they were attending SLIS classes, and said the School provided a great range of options in classes and workshops.

“The various tracks of classes that SLIS offered were very helpful,” Pertz said. “There’s no way to fit in everything in two or three semesters, so the different workshops helped to fill in the gaps and tailor the coursework to my interests.”

Pertz added that her SLIS professors advised students to get a range of knowledge because they would likely have to wear several hats once they entered the workforce.

“The workshops make it easy to get a flavor for everything, and that kind of helps prepare you for all of the on-the-job things that are going to come up,” Scibelli said. She noted that the SLIS faculty were very helpful and knowledgeable, and she could always “find someone to talk to for advice.”

“It felt like family; I felt like I made friends,” Pertz added. “As a late 20-something/early 30-something, you don’t think that it’s hard to make friends as an adult. With the SLIS family, it was like I had college friends again.”

Pertz and Scibelli set a goal and achieved it: they work at NASA. They are in their dream jobs, but there’s still room for bigger dreams.

“I applied for the space program because I want to go to Mars,” Pertz said. “I’ve already been declined once, and I’m waiting for my second rejection letter. It should probably be in the mail soon."

For now, Pertz and Scibelli don’t plan on leaving anytime soon, but they do have advice for students wanting to go after their dreams: be open to different opportunities and just go for it.