School of Library and Information Science (SLIS) student Stephanie Dawson Everett was named the Academic Library Association of Ohio (ALAO) Diversity Scholar for 2014-2015 at the group's annual conference in November 2014. She received a $1,500 scholarship.

Everett is currently pursuing a Master of Library and Information Science (M.L.I.S.) at Kent State SLIS, where she is specializing in library management.

“An M.L.I.S. degree is essential for my future in an academic library and will give me the advanced tools and knowledge to be competitive, competent and successful in this field,” Everett said. She also added that being a leader in her community will continue to be a large part of her professional career. In her winning scholarship essay, she noted the important role of libraries in serving everyone.

“I work on a campus in an urban setting and thus we have a diverse student population in relation to age, socio-economic status and ethnic background. In addition to our students, we are also within walking distance of a homeless shelter and on a daily basis we have several community patrons that will spend their daylight hours with us,” she added. “The mix of students and community patrons can be very interesting and sometimes challenging and there are people on campus who disagree with the library’s policy of serving all of our community, specifically those from the homeless shelter.

"However, we [at the University of Akron] have a commitment to serve all patrons and by doing so benefit not only the community patrons but students as well by exposing them to 'real life' and diversity in our community. It’s a small way that we are upholding the Bill of Rights and Diversity Standards.”

Everett said librarians, as public servants, are in a unique position to demonstrate this commitment by being mindful of cultural differences that may exist in their community, increasing awareness and strengthening community ties to other organizations who are able to serve diverse groups.

“Being able to connect people with each other and resources they need is a core value of librarianship,” she said.

According to Everett, she is the first marketing and communications manager for the Universities Libraries at the University of Akron. After working in a communications role in a library, she realized she likes the environment and foresees a future in the field.

“Marketing and communication are huge issues for the contemporary academic library, and reframing the libraries is a critical task for the next generation of librarians,” Everett said.

Everett graduated from Ohio Wesleyan University with a double major in ancient studies and geology and a minor in classical languages. She completed her master’s degree in communications at the University of Akron. She expects to complete her M.L.I.S. in the summer of 2016.

ALAO is the Ohio Chapter of Association of College and Research Libraries. Its mission is to advance academic library services in Ohio by identifying, studying and promoting the interests of academic librarianship and the personnel of academic libraries, and to provide opportunities for education and growth for library personnel. 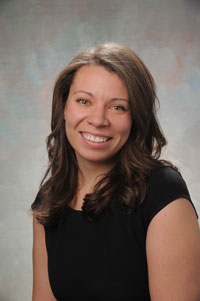