It isn’t often that one’s scholarly work is named “best in all the land” in a particular field of study.

Imagine Kent State University Assistant Professor Leisa Gibbons’ surprise, then, when she learned that her doctoral thesis was awarded the Australian Council of Professors and Heads of School in Information Systems (ACPHIS) PhD Medal.

Gibbons joined the faculty of Kent State’s School of Library and Information Science in Fall 2015 from Monash University in Melbourne, Australia, where one of her professors nominated her for the ACPHIS Medal. The first Monash graduate to receive the prestigious honor, she traveled to Adelaide, South Australia, in December 2015 to accept it.

In order to win the Australian-wide merit-based award, theses must be completed in the year the award is given, must address an important issue in the information systems field and must exhibit the potential for a paper to be published in a good quality, peer-reviewed journal.

Gibbons’ 300-page thesis, titled “Culture in the Continuum: YouTube, Small Stories and Memory-Making,” focuses on YouTube and understanding the complex contexts that individuals value. She worked with three prominent Australian YouTubers and talked with six domain experts from different fields of academic research who used YouTube in different ways.

“I found people who contributed video to YouTube but also interacted — made comments and watched videos — within the community,” Gibbons said. “They had to have an identity related to the community.”

A lot of her thesis centers around what kind of message the users were trying to promote and how they were identifying and defining themselves in the context of YouTube.

She was able to gain an understanding about how and what people value online — what’s considered a good video — which is established by a shared value system in the community.

Another major part of Gibbons’ thesis deals with personal recordkeeping and personal memory-making in relation to YouTube. Her research explored how "Yousers" made decisions about what was used, what went up, what came down and where it was stored in relation to value and importance.

“One ‘Youser’ I interviewed said, ‘If my video doesn’t get very many views, I’ll take it down because people don’t care about it. Then I’ll try to develop something that people might care about,’” Gibbons said. “He had an understanding of how he fit into the community, which helps to inform his practice.”

She examined how people use their spaces, or social media — specifically YouTube — for memory-making. Gibbons studied the use of technology as a tool that not only allows interaction (for example, the uploading of videos to YouTube), but also shapes that interaction. For example, the video might have been created and captured in a particular way or for a particular audience.

“The primary outcome of the project was a model, a theoretical model, of these contexts and how you might think about them all at once, as well as be able to extract context,” Gibbons said. “The research is about memory-making and how interactions online support this — and ultimately how archivists can support those people, as well as preserve it for the future.”

She said her research challenged what is known and assumed in relation to archival systems.

Gibbons is currently working on a research report based on her thesis for the premiere research journal Archival Science. She also presented her model at a Community Informatics conference in Prato, Italy, in November 2015.

At the Doctoral Consortium of the ACIS (Australasian Conference on Information Systems) where she accepted her award in December, Gibbons presented for 45 minutes on her experiences of undertaking a Ph.D. to current doctoral students and international faculty mentors. The presentation focused on lessons learned and, in particular, what it means to craft an identity as a researcher.

"The presentation was very well received, with many students coming up to me later thanking me for articulating their concerns as well as highlights of the Ph.D. process (both ahead and behind them)," Gibbons said.

Photo: Leisa Gibbons, Ph.D., with Frada Burstein, Ph.D., from Monash University, who nominated her for the award. 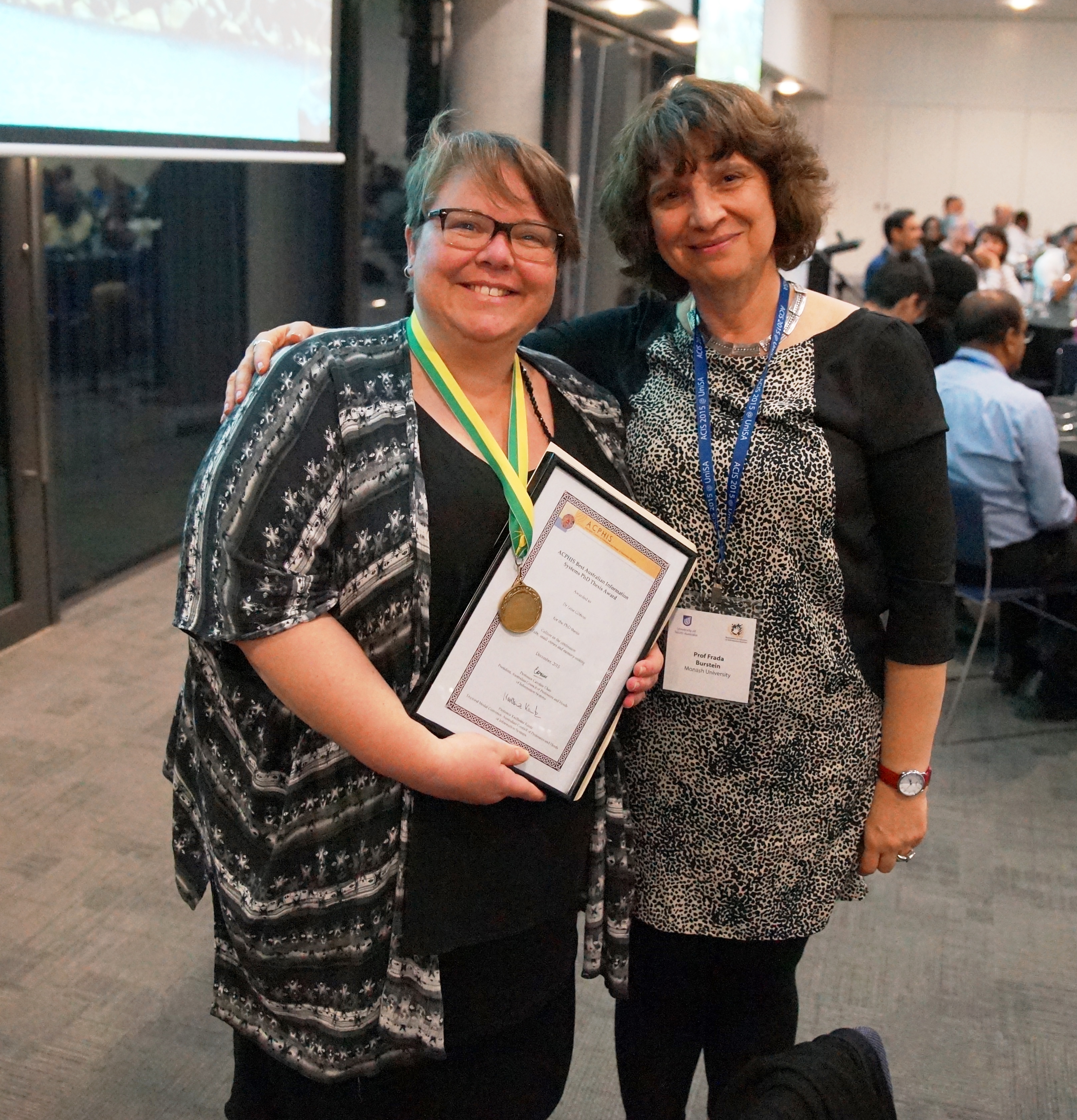