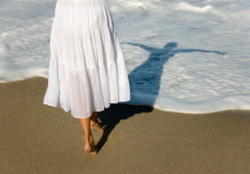 Tu B'Av, the fifteenth day of the month of Av, is a Day of Love in Judaism.

Tu B'Av, the 15th Day of Av, is both an ancient and modern holiday. Originally a post-biblical day of joy, it served as a matchmaking day for unmarried women in the second Temple period (before the fall of Jerusalem in 70 C.E.). Tu B'Av was almost unnoticed in the Jewish calendar for many centuries but it has been rejuvenated in recent decades, especially in the modern state of Israel. In its modern incarnation it is gradually becoming a Hebrew-Jewish Day of Love, slightly resembling Valentine's Day in English-speaking countries.

There is no way to know exactly how early Tu B'Av began. The first mention of this date is in the Mishnah (compiled and edited in the end of the second century), where Rabban Shimon ben Gamliel is quoted saying, There were no better (i.e. happier) days for the people of Israel than the Fifteenth of Av and Yom Kippur, since on these days the daughters of Israel/Jerusalem go out dressed in white and dance in the vineyards. What were they saying: Young man, consider whom you choose (to be your wife)?(Ta'anit, Chapter 4).

Origins of the Date

The Gemara (the later, interpretive layer of the Talmud) attempts to find the origin of this date as a special joyous day, and offers several explanations. One of them is that on this day the Biblical "tribes of Israel were permitted to mingle with each other," namely: to marry women from other tribes (Talmud, Ta'anit 30b). This explanation is somewhat surprising, since nowhere in the Bible is there a prohibition on "intermarriage" among the 12 tribes of Israel. This Talmudic source probably is alluding to a story in the book of Judges (chapter 21): After a civil war between the tribe of Benjamin and other Israelite tribes, the tribes vowed not to intermarry with men of the tribe of Benjamin.

In recent decades Israeli civil culture promotes festivals of singing and dancing on the night of Tu B'Av.

Reprinted with permission. To learn more about Jewish life, visit My Jewish Learning.